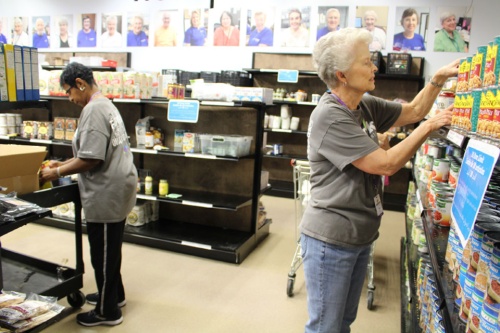 Volunteers help stock the shelves at Networku2019s grocery store, where guests can buy fresh produce and other goods.

What began as a grassroots effort to fill a service gap in Richardson ISD has grown into a thriving philanthropic machine known as the Network of Community Ministries.

The organization was founded in the mid-1980s during a period of economic turmoil, CEO Cindy Shafer said. Churches were overwhelmed by the sheer number of people seeking help, so rather than go it alone, a small group of churches joined forces to establish a centralized point of care.

According to the organization, over 20,000 Richardson ISD students meet the federal income threshold for free or reduced-cost lunch. Network strives to meet that need by focusing most of its resources on programs to help the hungry and homeless, Shafer said.

At the nonprofit’s on-site grocery store, clients can use an allocated currency to purchase food. That money can also be spent in the on-site clothing closet.

Network provided service over 40,000 times in fiscal year 2018-19, which represents a 35% increase from the year prior. An uptick in homeless and low-income residents regionally is one factor driving a surge, Shafer said.

“We help people get over the bump in the road,” Shafer said. “But I think as we’ve evolved, we realized that we need to come beside people and empower them so that they’re not circling back over that same road.”

North Central Texas Council of Governments project the number of seniors and low-income individuals will increase dramatically over the next decade. Shafer believes those changes will create a need for more mobile services.

The first step in that effort was recently launched in the form of a refrigerated box truck delivering meals to low-income students at four RISD campuses. Shafer said Network plans to eventually grow the mobile food pantry program to serve more students as well as other high-need populations.