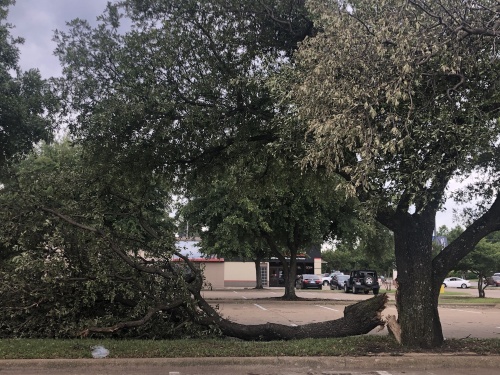 Downed trees, such as this one at Arapaho and Coit roads, are still scattered across Richardson after the June 9 storm.

Oncor Electric Delivery crews are working around the clock to restore to power to thousands of Richardson customers. The majority of outages are located west of US 75, but several areas east of the freeway were also affected, according to a map from Oncor.

The latest estimation for restoration of service in Richardson falls between Tuesday and Wednesday mornings, depending on location.

Additionally, the city reports several traffic signals have yet to be restored and a handful remain powered by generators.

Staff with the Brush and Bulky Item Collection service expects to spend the next several weeks clearing streets of down trees and other storm debris, according to the city's website.

"Since the storm, we've received over 1,000 calls for [Brush and Bulky Item Collection] services," Assistant Director of Public Services Travis Switzer said. "Typically, this time of year it's 600 to 700 [calls]."

Residents are encouraged to request pick-up service by calling 972-744-4111 or at www.cor.net/babic.

#Richardson crews are continuing the cleanup effort after Sunday’s severe storm but significant progress was made today. Here’s an update on the latest progress. https://t.co/7dc923AmW1 https://t.co/xb3SqGVrEd

Trash and recycling service may also be impacted by the storm. If garbage is not hauled on schedule, leave it out for crews to pick up the following day, the city says.

All Richardson ISD summer school sites, programs, camps and activities will resume June 12, according to the social media channels.

All RISD summer school sites, programs, camps and activities will resume normal operations beginning Wednesday, June 12. Power has been restored at all sites and campuses are safe for students to return. Special thanks to RISD facilities and maintenance staff for their efforts.

Most of Cottonwood Park, including the inclusive playground and pool, are expected to reopen tomorrow. One section of the park south of the basketball court will remain closed as well as the south bridge crossing. An estimated time for reopening is not yet clear.

Canyon Creek Pool also remains closed due to a power outage. Crews are working to restore electricity, and parks and recreation staff is hopeful it will reopen June 12.
SHARE THIS STORY