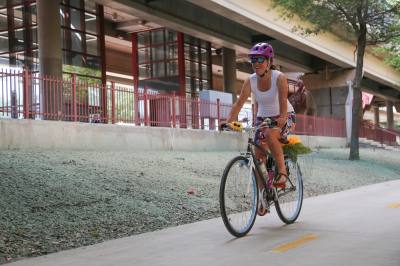 Richardson is a bicycle-friendly community according to the The League of American Bicyclists.

People looking to transition from four wheels to two may have an easier time doing so in Richardson, according to The League of American Bicyclists.

The league announced May 14 that it has renewed the city's Bronze Bicycle Friendly Community Award. The award recognizes the city's commitment to improving conditions for cyclists by investing in bike infrastructure, educational outreach, and the promotion and encouragement of bicycling through events and policies.

Richardson is one of 10 cities in Texas to receive the bronze award in 2019, according to a May 14 press release. Plano, Frisco and Fort Worth also received the bronze award. Austin is the only Texas city to have achieved gold status this year.

"The City Council has made becoming a more bicycle-friendly city a priority over the past several years, with several miles of bike lanes added each year," Mayor Paul Voelker said in a statement. "... We continue to seek opportunities to grow our status as we look at new and redevelopment opportunities across the community."

There are 475 bicycle-friendly communities across the U.S., according to the release. Over 800 communities have applied for the recognition, which takes into account input from local cyclists.

"We are inspired by leaders who see bicycling as a way to build more vibrant, healthy, sustainable and connected communities and be a part of the solution to many complex public health and safety challenges faced at both the community and national level," Executive Director Bill Nesper said.

By requiring that cities renew their status every four years, the league aims to ensure that communities are not only maintaining existing efforts but also keeping up with changing technology, national safety standards and best practices.
SHARE THIS STORY

Through its self-serve kiosks, the restaurant’s patrons can choose to order a variety of classic and signature ramen options, such as Signature Miso and Oni Reaper.