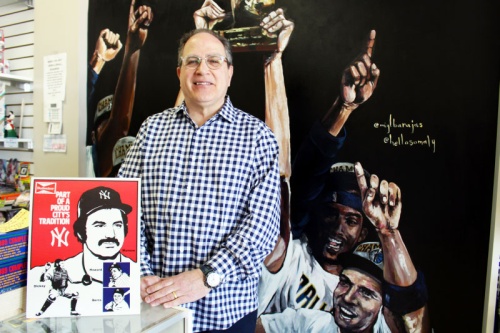 To some, collecting sports cards may seem like a hobby from a bygone era. But by pulling back the curtain at Nick’s Sports Cards & Memorabilia just outside Richardson, visitors can discover a universe where an encyclopedic knowledge of sports can translate into serious cash.

It’s true that over the past 30 years most sports card retailers have closed their doors, said Dean Fuller, current owner of Nick’s. He humbly attributes his business’s preservation to Nick and Debbie Redwine, who opened Nick’s in 1985. Since taking over in 2016, Fuller has stoked a fire in sports fans looking to take their knowledge of the game to the next level.

The most skilled card collectors are those deeply attuned to what is happening in sports. For example, right now Luka Doncic is the darling of the Dallas Mavericks, so his cards are selling for way above value, Fuller said.

Prior to owning Nick’s, Fuller was a practicing attorney and avid card collector. He and his sons had been patronizing the shop for decades when Nick Redwine asked him for help with the legal side of selling his business. It was then that Fuller decided to turn his beloved pastime into a career.

“I thought it provided an opportunity both from a business perspective to take it over and to try to get more kids into the hobby,” he said.

As one of the last remaining sports card shops in Dallas County, Nick’s houses thousands of vintage and new sports cards and a large selection of memorabilia, including jerseys, bobble heads and balls. Earlier this year, Fuller doubled his space by moving a few doors down from the original location at Coit and Campbell roads. A back room, dubbed “The Nick’s Fan Cave,” includes a foosball and shuffleboard table; flat-screen TVs; and space for events, such as live “box breaks.”

Box breaks involve opening a factory-sealed case of cards without knowing what is inside. Participants purchase a team for varying prices based on popularity and locale, and if their team is represented in the box, they get to keep the card.

“I wanted [Nick’s] to be more of a hangout than [a place where you] just come in, buy a card and leave,” Fuller said.