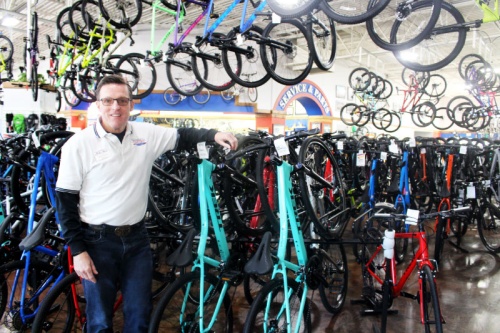 Woody Smith, owner and president of Richardson Bike Mart, joined the business as a bike technician in 1989.

Walking into Richardson Bike Mart feels more like stumbling into a cyclist’s fever dream. Clusters of bicycles line the walls, the floor and even hang from the ceiling.

At any given time owner and President Woody Smith said at least 1,000 bicycles are ready for purchase. Combine that with the roughly 500 warehoused bikes waiting to be assembled and another 1,500 housed at nearby locations, and what results is a companywide inventory that rivals shops nationally and perhaps even globally, Smith said.

The business’s flagship location at Coit and Campbell roads in Richardson has been hailed by Trek Bicycle Corp. as the largest bike-specific shop in the world. And while Smith cannot swear to the accuracy of that statement, he is certain that it is at least the largest in the Southwest. In total the bike mart comprises 33,200 square feet.

“We’ve always had service and sold bikes and accessories,” Smith said. “Nothing has really changed; everything just got more grand when biking took off.”

Founded in 1962 as Mike Hall Bike Mart, in 1980 the business was purchased by Jim Hoyt, who at the
time worked as a Schwinn sales representative.

According to Smith, the name change happened almost by accident. The Richardson shop was one of four Mike Hall Bike Marts, so to ensure customers had reached the right location, Hoyt would greet each caller with “Richardson Bike Mart.”

Smith joined the business in 1989 in the service department. He said he ping-ponged between sales and service until he was promoted to general manager in 2000.

Then, at Hoyt’s request, Smith became the principal owner of the business in 2011.

Seventeen brands of bicycles ranging the gamut of mountain to BMX to cruisers are sold at the bike mart along with a wide range of accessories. And while most bikes are new, 8 percent of sales come from used bikes, Smith said.

Even as the company has added inventory and locations, Smith said the quality of customer service remains intact. He attributes this to his employees’ affinity for the sport—a love that propels them to go the extra mile. One example of that dedication is a mobile service that will travel anywhere in a 25-mile radius to fix bikes in disrepair.

“Our service is what got us here,” Smith said. “Everybody here loves what they do; this is a passion-driven business.”