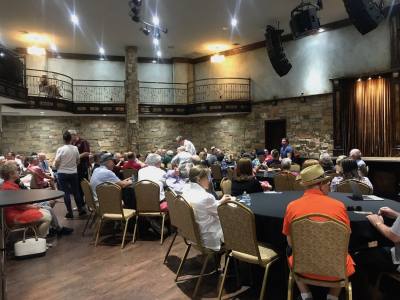 McKinney Mayor George Fuller held a town hall meeting May 14 about US 380.

During a town hall meeting May 14, McKinney Mayor George Fuller presented two new alignment options for US 380. The options are intended to be conversation starters, Fuller said at the meeting.

The new pink alignment starts west of Custer Road running between the Texas Department of Transportation's previously proposed alignments named red A and red B. The pink line reconnects with the city's teal alignment.

This teal alignment was sent to the North Central Texas Council of Governments on April 24. Fuller said this alignment was also a conversation starter.

The town hall comes a week after TxDOT officials held public hearings about its recommended alignment for US 380 through Collin County. TxDOT officials said all viable options will be considered during the environmental study.

These factors are considered by TxDOT when determining if an alignment is a viable options. pic.twitter.com/62FmBIldIh

No decision is made, Fuller said.

"We are far from knowing what's happening," he added.

The alignments are expected to be voted on by council at a later date, and Fuller said he expects to have more town hall meetings and resident discussions in the meantime.

Comments about the alignment can be emailed to Fuller at [email protected] with the subject line "380."

"There is no option that will satisfy everyone," Fuller said.

But everyone has to look regionally at how to minimize the impact and make an alignment workable, Fuller added.

US 380 is a state highway, and TxDOT officials will select the best option for the roadway. Doing nothing to relieve congestion is still an option, according to TxDOT officials.

Construction on the nearly 33-mile roadway will not begin for another six to 10 years. The project could take 20 years to complete, according to TxDOT officials.

Prior to dirt turning, TxDOT will divide the road into independent projects and prioritize them. Then, an environmental study and design schematics will be done.

The environmental study looks at historic places, cemeteries and wetlands that might be affected by the alignment, TxDOT Public Information Officer Ryan LaFontaine said in a previous interview with Community Impact Newspaper.
SHARE THIS STORY