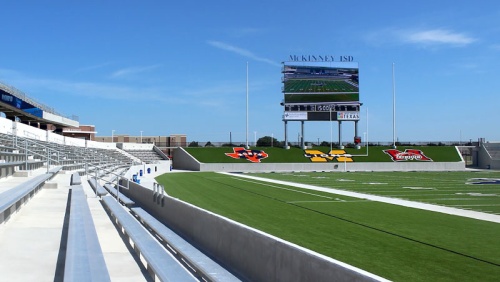 The NCAA Division II Football Committee announced in early October it selected the MISD stadium and The Lone Star Conference to host the 2018 championship game.

A national spotlight will shine on McKinney and McKinney ISD in December as roughly 6,000 people are expected to attend the NCAA Division II football national championship game held at the MISD Stadium and Community Event Center.

The NCAA Division II Football Committee announced in early October it selected the MISD stadium and The Lone Star Conference—a collegiate athletic conference affiliated with the NCAA Division II—to host the 2018 championship game, which will be held Dec. 15.

The nearly $70 million stadium was one of several bids the committee received to host the championship game, according to a news release from the NCAA.

“McKinney is so excited to be able to host this game in the first year of having the stadium open, and we feel it’s an asset to our community because of the potential to bring other events into town,” Dee-dee Guerra, executive director of the McKinney Convention & Visitors Bureau, said in an email.

NCAA officials estimate 6,000 people will attend the game in McKinney; however the city is preparing for up to 10,000 fans. This number is determined from past championship attendance, during which the past four years had an average attendance of 9,000 people, according to NCAA officials. These estimates do not account for players, coaches or university staff.

The city of McKinney estimates 80 players and cheerleaders per team will attend the game in addition to 10 NCAA staff members and 12 officials.

“Holding the NCAA Division II championship game in the new stadium is putting [McKinney residents’] tax dollars to work,” Guerra said in an email. “Not only is this event utilizing the brand-new state-of-the-art facility for more than high school football, but it will also provide a positive impact on the economy for McKinney.”

“We’ll be working in conjunction with the city of McKinney and The Lone Star Conference to make this a great experience for everyone involved,” MISD Director of Athletics Shawn Pratt said in a news release from the district. “The championship is nationally televised by ESPN, and we’re excited about what it will bring to the city and to our district.”

In hopes to attract attendees to McKinney, Guerra said the city will promote itself through a digital marketing effort. NCAA officials have already committed to staying in McKinney during the championship.

Since 2014 the championship game has been held at Children’s Mercy Park in Kansas City, Kansas, but due to surface renovations the committee opened bids for this year’s game, according to the release from the NCAA.

“2017’s attendance was down just over 55 percent compared to 2016 due to a local school playing in 2016’s game—Northwest Missouri State,” Detter said in the email.