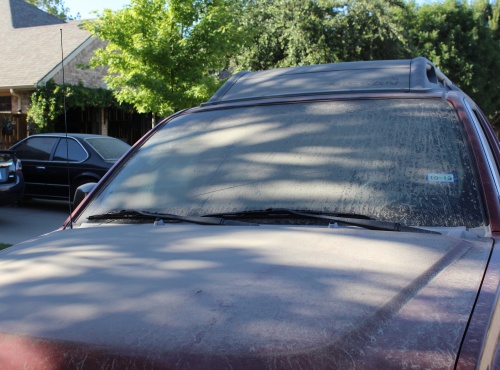 Dust that the city of McKinney says came from concrete plant Martin Marietta covers a car in a nearby neighborhood.

Editor's note: This article has been updated to include comment from concrete plant Martin Marietta. The article was also updated to reflect results from a Texas Commission on Environmental Quality test conducted in July 2018 and February 2019.

City of McKinney and state officials are investigating after several residents discovered patios, lawns and cars covered with a thick layer of dust Friday morning.

The McKinney Fire Department noticed an “unusual amount of dust and dirt” coming from concrete plant Martin Marietta, according to Michael Quint, the city's executive director of Development Services. The cause of the dust is unknown, he said.

Martin Marietta is located along Hwy. 5 across from a neighborhood called McKinney Greens where much of the dust had accumulated sometime between Thursday night and Friday morning, July 18 and 19.

For years, residents in the area have expressed concerns about dust and noise coming from Martin Marietta and two other industrial plants along Hwy. 5.

A spokesperson for Martin Marietta said the Texas Commission on Environmental Quality visited the ready mix concrete plant on Friday but that operations at the facility will remain closed until a cause is determined.

"We will work with the TCEQ to investigate what happened," Amanda Miller, director of Government Affairs and Public Relations for Martin Marietta, said in an email. "Additionally, Martin Marietta has retained a company to clean up the material that was released, and the plant will remain shut down until we can determine the cause of this release and remediate it."

Residents along Dog Leg Trail in McKinney Greens, which is north of the plant, were most affected. Dotti Stevens, who has lived in the community for 12 years, said she has never seen this much dust overnight.

“We’ve never been impacted with an episode that has tracked like this,” Stevens said. “It accumulates over time, but nothing that has been this impactful.”

The TCEQ confirmed it had received several complaints about the large amount of dust.

“The TCEQ has initiated an investigation in response to several complaints received regarding dust in the McKinney area [the morning of July 19],” spokesperson Marty Otero said in an email to Community Impact Newspaper. “As part of the investigation, the TCEQ investigator may collect samples.”

In July 2018, the agency conducted an investigation at Martin Marietta as well as several locations in McKinney Greens to determine the source of particulate matter in the area. Results of the test in July 2018 showed no violations of state or federal air-quality regulations, according to the TCEQ.

In February 2019, TCEQ investigated complaints of air-quality near Martin Marietta and CowTown Redi Mix, which is located adjacent to Martin Marietta. Results of the investigation indicated a violation at CowTown, according to a TCEQ report dated April 15, 2019. That report also stated that dust found "appears to suggest" that corrective actions at Martin Marietta are not working.

Quint said city staff has been onsite Friday collecting evidence to document the dust. The city will take any appropriate enforcement necessary to make sure this does not happen again, he said.

“Obviously we can’t ensure it won’t happen again, but we’re definitely documenting as much as we can to make sure that we hold whoever the violators are … accountable to the extent we can,” Quint said.

Steve Kerkvliet, who has lived in McKinney Greens since 2008, said he used a leaf blower to clean dust off his property at 7 a.m. and again at 9 a.m.

Residents are encouraged to send any photos and documentation to the city of McKinney.

This story will be updated as more information becomes available.
SHARE THIS STORY