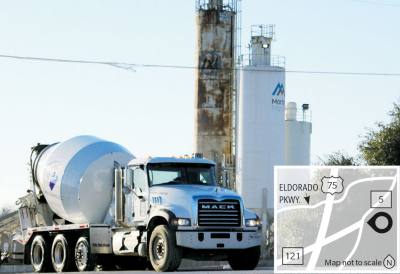 Residents are concerned about noise and pollution coming from three industrial plants located on Hwy. 5 in McKinney.

McKinney residents have filed complaints with the city and state for years about noise and dust coming from three industrial plants along Hwy. 5.

Those complaints intensified last year when residents made their concerns public at City Council meetings. They are demanding answers for their neighborhoods of High Point MHC and McKinney Greens, but so far no solutions are in sight.

CowTown Redi Mix and Martin Marietta produce ready-mixed concrete and are located within 500 feet of the nearest homes. Lhoist North America, which supplies lime slurry, is adjacent to Martin Marietta.

“We understand the residents are impatient for some sort of a change,” City Manager Paul Grimes said. “What I always try to do is explain to [residents] and clarify that we may not have an answer that you’re going to ever like because [the businesses are] … zoned.”

While residents continue looking for clarification, the city is working to enforce its noise ordinance. The city is also working with the Texas Commission on Environmental Quality to ensure the plants comply with state law.

Grimes said the city has spent hundreds of hours working with residents and the plants to find solutions. Michael Quint, McKinney’s executive director of Development Services, said the city is having regular meetings with the plant operators.

“I think really what you’re seeing is urbanization,” Grimes said. “What was acceptable 10-15 years ago … isn’t going to be acceptable going forward.”

To determine whether a business is in violation of the city’s code, staff looks to two ordinances—one related to noise and the other involving performance standards, Quint said.

The city can also check for violations by measuring how loud the noise is coming from the plant. McKinney conducted a noise study in July and found no violations, according to city documents.

The city discussed modifying its noise ordinance in July but decided to hold off and enforce what it has, Quint said.

High Point manager Linda Krohn and resident Rose Rico Ayala said noise coming from the plants seemed to die down for a month and a half when city discussions began. But the noise has picked up since then, they said.

“[Noise concerns are] still a fight we need to continue,” Krohn said.

According to the city, CowTown’s site plan is up to city code, and the plant received a six-month noise variance that expires March 1.

Lhoist is also in compliance with the city’s noise ordinance. But its site plan does not comply with what was approved by the city, according to Quint.

“Lhoist North America Inc. is committed to being a responsible operator and has had constructive conversations with city officials in recent months concerning site compliance and other matters,” Kenneth Curtiss, vice president, chief financial officer and general council for Lhoist, said in an email.

Quint also said Martin Marietta’s site plan is not in compliance with the approved site plan from the city. In addition, the plant received two citations in September and October for operating power equipment between 10 p.m. and 7 a.m. The citations are being handled through municipal court.

Martin Marietta did not respond to requests for comment from Community Impact Newspaper. CowTown declined to comment.

The city will continue conducting periodic inspections to ensure the plants are abiding by the city’s code and are working through issues with the site plans, Grimes and Quint said.

Many of the residents’ complaints also revolve around air quality.

The dust travels far, Krohn said. The dust is not just in McKinney Greens or High Point but everywhere in the city, she said.

In July, the TCEQ conducted an air-quality test at Martin Marietta and locations in McKinney Greens. Samples taken at two McKinney Greens locations showed at least 80 percent cement dust. The sample taken at Martin Marietta also contained 80 percent cement dust. The high percentage of dust by itself does not trigger a violation.

“Other information collected during an investigation, such as prevailing winds, direction of the suspected source, extent of particulate coverage, time of deposition, etc., may support a nuisance violation, but impacts to the use and enjoyment of the [complainant’s] property must also be evaluated,” TCEQ spokesperson Marty Otero said in an email.

According to the TCEQ, the concrete plant was not in violation of state or federal air-quality regulations. The sample supported the potential for operations at Martin Marietta to cause “nuisance conditions, but [the samples are] insufficient to substantiate the current presence of nuisance conditions,” according to a report on the test released in December.

This is not the first time the TCEQ has contacted the plants on Hwy. 5.

In July both Martin Marietta and CowTown were issued notices of “alleged violation for visible emissions leaving their property.” The violations were resolved Oct. 19, according to the TCEQ.

While McKinney’s city code has a section on air pollution control, Grimes and Quint said air-quality enforcement is better when left to the state.

“Our ordinance is so outdated and so old that even the measurement criteria is so dated; I don’t even know how you would quantify it,” Grimes said.

Rico Ayala said she is asking the TCEQ to do an air-quality inspection in her neighborhood.

“[We need to] actually get proof on paper,” Rico Ayala said. “Because they feel like, ‘Oh, [the residents are] just going to go away’ … and that’s not the case.”

Many residents said they feel they are at a loss about what to do.

“I don’t know that there is [a solution],” Krohn said.

The city asked the TCEQ in November to get more involved by conducting “reoccurring, proactive inspections and monitoring.”

TCEQ said it will continue to respond to complaints and may conduct periodic proactive investigations at the plants.

“We believe that the TCEQ has investigated these matters appropriately,” according to a Dec. 20 letter from the TCEQ to McKinney.

Taking legal action may seem like the natural next step, Quint said. But the city wants to avoid litigation, the expense involved with that and the uncertainty of a legal battle, he said.
SHARE THIS STORY