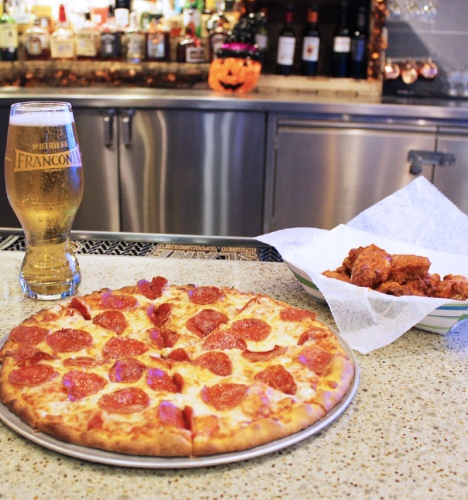 It is hard to tell from the outside, but located inside the Dr Pepper StarCenter at Craig Ranch sits a locally-owned and -operated restaurant—19 Degrees Sports Bar & Grill.

Originally opened as Champions Café & Sports Bar in 2015, the restaurant underwent rebranding this summer, which included interior renovations and renaming the restaurant.

The new name—19 Degrees—comes from the temperature of the ice in the ice rink, restaurant manager Kyle Eichberger said.

Owner and former Olympic figure skater Pierre Panayi said he decided to venture into the restaurant business when he saw the location for sale and saw a need for a family-friendly restaurant inside the StarCenter.

“We are proud of what we’ve done here,” Panayi said. “It’s become a place where people like to come and eat and drink. Essentially, before it was a snack bar that did lots of hot dogs and pretzels, and now we have that same fast-food option, but we also have a more diverse menu.”

The restaurant features a full bar and seven taps that feature locally brewed and well-known beer options. Starting at 7 p.m. every Thursday night a new beer is placed on tap and is usually served with glassware the customer can keep, Eichberger said.

Eichberger said 19 Degrees is unique because it is a family-friendly sports bar. Since the StarCenter offers minor league hockey, senior league hockey and open-skate sessions the restaurant has customers of all ages, and many parents enjoy having a place to sit and watch their kids skate or just come and hang out.

Growth and expansion will continue in the summer, Eichberger said, with plans to double the bar space and beer-tap selection in addition to adding an outdoor patio and outdoor entrance.