McKinney residents speak out about new proposed alignment for US 380 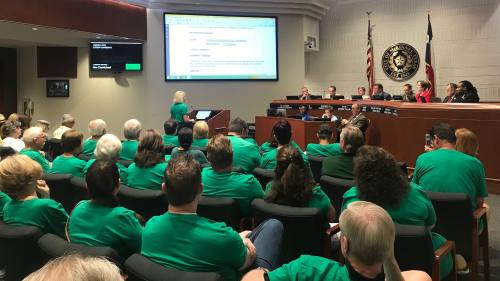 During a City Council meeting approximately 65 people expressed support for the consideration of a new US 380 alignment running to the west of Custer Road.

During a McKinney City Council meeting Tuesday night approximately 65 people expressed support for the consideration of a new US 380 alignment starting to the west of Custer Road.

The new alignment shows US 380 moving north to the west of Custer, passing through Custer and moving further north running along Bloomdale Road. The alignment then connects to one of the Texas Department of Transportation’s proposed alignments, which runs north of US 380’s current alignment.

“We’ve gotten good feedback from everybody saying that they are looking at this option,” Carmichael told Community Impact Newspaper.

Supporters of the new alignment west of Custer say widening US 380 to a limited-access roadway, or highway, is not a viable option due to its effects on homes and businesses.

“The western bypass option would be the best solution for the region and would be less destructive of residential and commercial property, have a lower implementation cost, have a faster implementation schedule and reduce the negative impact on the community overall, thus benefitting McKinney and Collin County," Carmichael said during the meeting. "It is time for this City Council to take steps to shape our future now. This should not be a TxDOT decision but [a] city of McKinney decision.”

Fuller told Community Impact Newspaper that he and council members have seen the proposed bypass option and begun discussions.

“We looked at that, [and] we have actually talked in-depth, each of us individually, with our city manager and staff,” Fuller said. “… Again, we’re at the initial stages."

Fuller said he hopes city staff will present a resolution to council at a work session by the end of August or mid-September.

More information about TxDOT's US 380 alignment can be found in our previous coverage here.