TxDOT, NCTCOG to host public hearing on proposed left-lane restrictions for large trucks on parts of I-35E in Lewsiville 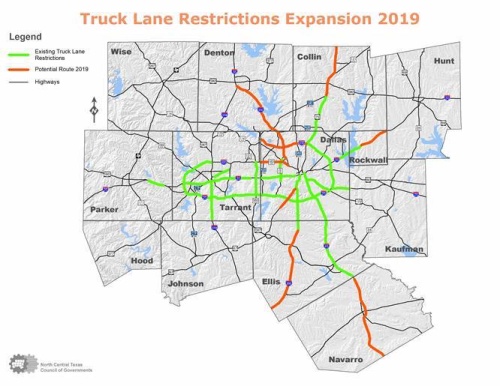 The Texas Department of Transportation is seeking public input on a proposal that would expand left-lane usage restrictions on large trucks on several highway corridors in the Dallas-Fort Worth area.

The Texas Department of Transportation is considering the implementation of expanded left-lane usage restrictions for trucks with three or more axles on several highway corridors in the Dallas-Fort Worth area, including portions of I-35 East in Lewisville.

TxDOT will host a public hearing with the North Central Texas Council of Governments on July 23 at 6 p.m. in Irving City Hall to gather public input on the proposal.

According to TxDOT, these restrictions have already existed on select North Texas highways for more than a decade.

The proposal to expand the restrictions comes as the department looks to improve road safety, according to a July 16 joint press release from TxDOT and NCTCOG.

“Based on traffic studies, truck lane restrictions have been shown to improve mobility, safety and air quality,” the release stated.

According to the release, the proposal would extend truck lane restrictions to all or portions of US 75 in Collin County; I-45 in Navarro County; I-35 East in Ellis, Dallas and Denton counties; I-635, Hwy. 183 and US 67 in Dallas County; and I-30 in Rockwall County.

If the proposal is implemented, restrictions on trucks would be in place in both directions along the following: