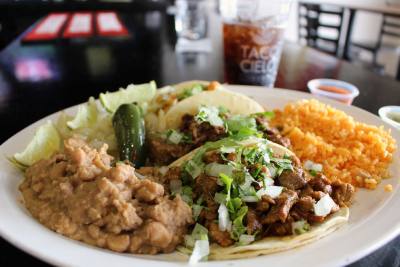 The taco plate ($8.75) nfeatures three street tacos of a customeru2019s choosing along with rice and beans, grilled onions and a jalapeno. More than 20 years ago, Ozkan Ozturk moved from his home in Turkey to Texas to pursue his dream of obtaining a master’s degree in physics and to learn English.

But the journey was harder than expected, and Ozturk said he decided to drop out and get a job.

In 2006, his passion for cooking led him to open Taco Hut, which is attached to a gas station in Lewisville.

After being told by several of his customers that he should open a restaurant, Ozturk begin searching for the right location.

“I wasn’t just looking at Highland Village; I was looking at any place with a good location,” he said. “Plus it’s close to Lewisville and my home in Corinth.”

Since opening Taco Cielo, Ozturk said he no longer owns Taco Hut. However, he did open another location of Taco Cielo in The Colony.

“My plan is to open another location,” he said. “I want to get this place going, and then whenever I feel comfortable, I will open another.”

Ozturk said although there are many taco restaurants in the area, Taco Cielo is the closest to authentic Mexican food that customers will find.

“We are so different from a Fuzzy’s or a Torchy’s and Velvet Taco,” he said. “We are authentic as possible with recipes that come from Mexico. We get people who moved here from Los Angeles, California, and they try our street tacos, and they said this is the closest they can find to back home around here.”
SHARE THIS STORY

Owning a restaurant is practically a family tradition for brothers Sam and Michael Billelo, who opened Fiori Italian Restaurant and Bar in Flower Mound in 2019.

The facility was scheduled to open in late May but was delayed due to a lifeguard shortage.

The new location will provide takeout service only.

The project is expected to begin on Aug. 2

The boutique is located in Music City Mall Lewisville.