Improvements to I-35W are expected to ease traffic congestion along the interstate.

NTE Mobility Partners has gathered the funding needed to begin construction on the final phase of the North Tarrant County Express.

Known as Segment 3C, the phase will span 6.7 miles along I-35W between US 287 and Eagle Parkway in northeast Fort Worth, according to a news release. Preconstruction activities have already started, and construction is slated to begin in 2020. Work is expected to be completed in 2023.

Construction will include reconstructing the segment's two northbound and two southbound lanes. NTEMP, which will finance, design, build, operate and maintain the segment of the roadway, also plans to add two TEXpress managed toll lanes.

Drivers on 3C can expect a fixed toll price for the first six months after the lanes open. Afterward, prices will vary based on traffic levels.

Prices will be displayed on digital signs at each entrance onto the toll lanes. NTEMP will monitor the lanes and calculate prices every five minutes based on traffic levels.

Money generated from the tolls will be used for operation and maintenance of the interstate and to pay back equity and bonds used to pay for the project, according to the news release.

Upgrading I-35W is expected to ease traffic congestion along the interstate. More than 156,000 drivers use I-35W north of I-30 each day, according to the Texas Department of Transportation. That is expected to rise to 315,000 vehicles daily by 2045.

The 3C project will connect to segments of I-35W that have already been upgraded. The 3A segment, which improved existing lanes and added two TEXpress lanes between I-30 and I-820 in Fort Worth, was completed in July 2018.

The 3B segment also improved existing lanes and added two toll lanes between I-820 and North Tarrant Parkway in Fort Worth. That project was completed in December 2016.
SHARE THIS STORY

The store offers wellness and beauty products infused with CBD.

Coffee is sourced from LoneStar Roasters and brewed in-house. 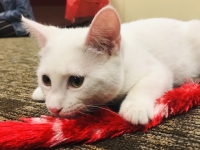 XPO plans to lay off a total of 304 workers at its AllianceTexas facility.

Northwest ISD seniors can begin the scholarship application process with a number of organizations.

Chapps Burgers has plans to relocate to a larger building on the north side of Keller Parkway by summer 2021.

The business offers an extensive menu of Old World and New World wines.

The NISD board of trustees unanimously approved Feb. 10 a bond referendum that would add new schools, replace some existing schools and expand other schools.