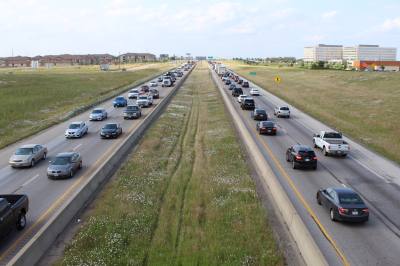 More relief is in sight for congestion on I-35W, but it will come at a price to drivers.

Construction is expected to begin by the end of the year on the roadway’s final phase of expansion. Known as 3C, the phase is expected to cost $662 million and will bring two northbound toll lanes and two southbound toll lanes to I-35W between North Tarrant and Eagle parkways. Motorists on the toll lanes will pay between 15 cents and 75 cents per mile, depending on traffic levels.

The project will also widen and improve two existing free lanes and build continuous frontage roads along the 7.1-mile stretch in northeast Fort Worth.

The 3C phase is part of the North Tarrant Express, a project that has already improved existing free lanes and added toll lanes to I-35W between downtown Fort Worth and North Tarrant Parkway.

Details of the project
Access to AllianceTexas is a concern for Hillwood, the community’s developer. The 26,000-acre development in northeast Fort Worth is home to more than 500 companies.

At just 40%-50% of build-out, the development has the potential for another 100 million square feet of economic activity, said Russell Laughlin, executive vice president of Hillwood Properties.

“Growth puts additional economic activity on the highways. If you don’t have [improved roads], then there’s no economic benefit for a logistics company—an Amazon, a UPS, a Facebook—to locate to a place where they can’t move around,” Laughlin said.

In 2003, Hillwood looked at traffic levels along I-35W. The company predicted by 2020, the roadway would have severe capacity constraints causing public safety and health issues.

To help expand the roadway, Hillwood has donated to the state more than 1,000 acres that is providing most of the right of way needed for the North Tarrant Express.

“That’s a benefit that you have for long-range planning, making sure that you’ve provided the best and most cost-efficient pathway for ... needed national and regional transportation facilities,” Laughlin said.

Building toll lanes
The 3C phase will be constructed by North Tarrant Infrastructure and developed and operated by NTE Mobility Partners. Both are owned by Ferrovial, a Spanish company that develops toll roads across the world.

In February, TxDOT approved spending up to $18 million to acquire the remaining right of way for Phase 3C. NTEMP will use bonds and equity investments to provide the rest of the funding for the project.

NTEMP plans to build managed toll lanes—called TEXpress lanes—along Segment 3C. Money generated from the tolls will pay back its investment in the project.

The tolls will also pay for the operation and maintenance of the North Tarrant Express, said Robert Hinkle, director of corporate affairs in North Texas for NTEMP.

What drivers can expect
Drivers on Segment 3C can expect a fixed toll price for the first six months after the lanes open. Afterward, prices will vary based on traffic levels.

By contract with TxDOT, NTEMP is required to maintain speeds of at least 50 miles per hour on the toll lanes. As speeds slow and traffic increases, prices will go up, filtering drivers off the toll lanes.

As speeds pick up and traffic decreases, tolls will be cheaper, encouraging more drivers to use the toll lanes.
Prices will be displayed on digital signs at each entrance onto the toll lanes. NTEMP will monitor the lanes and calculate prices every five minutes based on traffic levels.

Timeline
Before construction can begin on Segment 3C, NTEMP needs to gather funding, and the project needs to complete the design process.

Construction will likely start by the end of the year and take about 3 1/2 years to complete.
SHARE THIS STORY

The Peabody Hotel in Roanoke back on track after yearlong halt

The Peabody Roanoke project is starting back up and is estimated to be completed in about two years.

The Knot salon in Keller plans to add medspa services

The salon plans to begin body sculpting and laser hair removal, among other services.

Hawaiian Bros now serving up island specialties in Fort Worth

The menu features a variety of proteins, such as teriyaki chicken or seasoned vegetables.