The city of Keller is proposing a tax increment reinvestment zone along Hwy. 377 and around Old Town Keller. (Ian Pribanic/Community Impact Newspaper)

The city of Keller is making preparations to create a tax increment reinvestment zone, or TIRZ, along Hwy. 377. The proposed zone would fund capital improvement projects in the area over the next 30 years, including road improvements, public art and economic development grants. 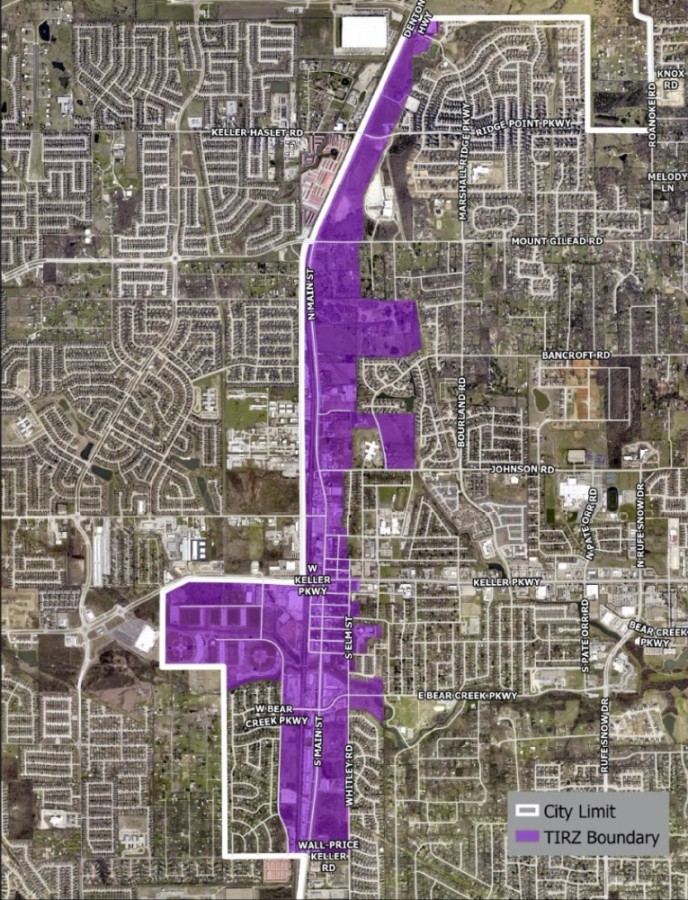 Improvement projects in the proposed area are estimated to cost roughly $129 million, according to Trent Petty of Petty & Associates, who presented the plan at a Feb. 24 City Council work session. The high price of the developments comes from the fact that the projects will be parceled out over three decades, Petty said.

“Remember, we’re balancing that [with] about $400 million in new value ... as this development area grows,” he said.

The proposed zone would cover 795.19 acres focused around Hwy. 377 and Old Town Keller. Most tax-exempt entities, such as churches and schools, are excluded, and the zone would include the upcoming Center Stage development.

City Council has approved a public hearing on the proposed TIRZ for March 16. The purpose of the public hearing will be for council to hear input from residents for or against the boundaries of the potential TIRZ, according to a resolution approved during a March 2 City Council meeting.

According to Petty, property tax revenue from land inside the future TIRZ goes into Keller’s general fund, and will continue to do so. However, as property values increase due to development, any additional revenue above the established baseline would be diverted to a TIRZ fund, he explained.

Once capital improvement projects in the area are complete, the TIRZ would be terminated, and all property tax revenue would return to the general fund, Petty said.

Keller's first TIRZ, established around Keller Town Center, ended in the 2017-18 fiscal year, according to the city documents. All property taxes in that area now flow into the general fund.