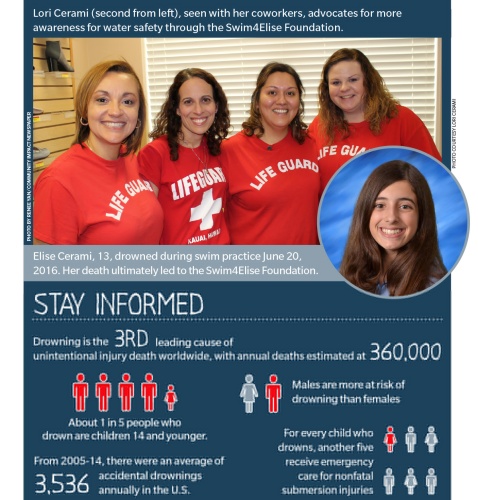 Drowning is the 3rd leading cause of unintentional injury death worldwide, with annual deaths estimated at 360,000.

Lori Cerami received a phone call shortly after dropping her 13-year-old daughter Elise off at an early morning swim practice June 20, 2016. Elise’s swim coach told Cerami that her daughter was being rushed to the hospital.

Elise’s teammates had found her unconscious at the bottom of the pool, Cerami said. The swimmers who pulled her out later calculated she was underwater for about six minutes: She drowned during practice. There was no lifeguard on duty, and neither of the coaches saw Elise, she said.

In the aftermath, the family began receiving donations from those who wanted to help. This ultimately led to the Swim4Elise Foundation.

It began as a way to provide scholarships to athletes who wished to participate in swim camps and programs, but it evolved to promote awareness about water safety. One of Cerami’s goals is to help 100 people earn lifeguard certifications each year. The Swim4Elise Foundation raises money for scholarships and lifeguard certifications through donations and its fundraiser, the Run4Elise event.

The 2019 Run4Elise event took place May 4. Over 600 runners and walkers participated, and the foundation has raised over $50,000 since January.

The foundation also has a daycare outreach program and champions other efforts to improve water safety, Cerami said. It became apparent to her that even swimmers may not be able to identify and help someone who may be drowning.

“People ask me, ‘How did this happen? She knew how to swim,’” Cerami said. “But just because we know how to swim doesn’t make us drown-proof.”

Drowning is silent, she said. It is not what many people think it is.

“If you were in distress in the water, you could make a commotion—that’s not quite drowning,” Cerami said. “When you are actually drowning, there’s something called the instinctive drowning response. During the instinctive drowning response, your autonomic nervous system kicks in, and your body becomes so focused on getting air in ... that you have no air to expel out to call for help.”

Panic may also affect an individual’s ability to swim despite his or her skill level, according to a 2016 study published in the American Physiology Society Journal.

“At that point, people say, ‘Then how do you prevent drowning?’” Cerami said. “Someone has to be watching, regardless if you know how to swim.”

Many people assume all swim practices and municipalities are required to have lifeguards present, but that is not necessarily true, Cerami said. In Texas, lifeguard requirements vary, depending on a pool’s classification, according to the Texas Health and Human Services Department.

Elise was a member of Carroll ISD’s North Texas Nadadores swim club, Cerami said. NTN coaches are members of USA Swimming, according to the club’s handbook. USA Swimming is the national governing body for swimming in the U.S.

A representative for USA Swimming confirmed in an email response that coaches are required to go through safety training, but it does not require coaches to be lifeguard certified.

“These skills are something you have to practice,” she said. “One of the big changes I would like to see is that swimmers, coaches and aquatic facilities partner in their training on emergency action plans.”

An emergency action plan, or EAP, is comparable to a fire drill, Cerami said. Almost all swimmers who apply for Swim4Elise scholarships say they have not practiced an EAP before.

“In public schools, we are required to do a fire drill—and not just with the teacher. We have to include the students and staff of the facility—but in water, we’re not doing it,” she said. “The American Red Cross already says it should be implemented.”

Cerami said she feels a responsibility to educate others on water safety and to reduce the risk of another tragedy.

“My daughter, she was so passionate about swimming, she would absolutely want us all to swim,” she said. “She’d just want us to do it more safely. She’d want us to be smarter.”