Here's where to find Little Free Libraries in Grapevine, Colleyville and Southlake 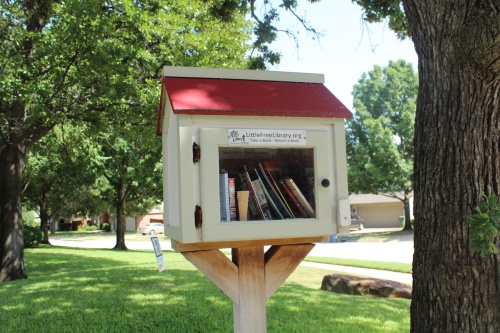 Little Free Libraries can be found in Grapevine, Colleyville and Southlake.

Little Free Library is a nonprofit organization that aims to increase book access to readers through a “take a book, leave a book” free exchange.

LFLs usually take the shape of mailboxes or birdhouses and are often placed in areas with high foot traffic.

The LFL mission is to inspire a love of reading and spark creativity by fostering neighborhood book exchanges around the world, LFL Program Manager Margret Aldrich said.

“People really want to build a community where they live and give back, and this is a way to do it and at the same time create book access and build a culture of reading,” she said.

The nonprofit’s founder, Todd Bol, built the first LFL in 2009 in memory of his mother, who was a teacher and lifelong reader. After seeing the community’s positive response, Bol decided to start the nonprofit in 2012. Now there are more than 70,000 LFLs worldwide in 50 states and 85 countries.

At an LFL, anyone can take a book or leave a book, even if they do not have one to share.

Anna Huser set up an LFL in Grapevine, but currently the library is down to be relocated.

“We got visitors to the library every day,” Huser said. “We eventually had a bald patch in the grass in front of it. ... One of the very first visitors was a young man who said, ‘I don’t really read too well,’ but he was brave enough to take a ‘Guinness Book of World Records’ book to read at
his leisure.”

Susan Cook said her husband built their LFL in Colleyville two years ago.

“I wanted one because when I left the classroom I had a ton of books to share,” she said. “I like reading books in print.”

She said the library builds community, since readers in the neighborhood prefer to share what they read instead of putting a book on the shelf.

Grapevine, Colleyville and Southlake are home to several LFLs.

For more information on LFLs or to register an LFL, visit www.littlefreelibrary.org.