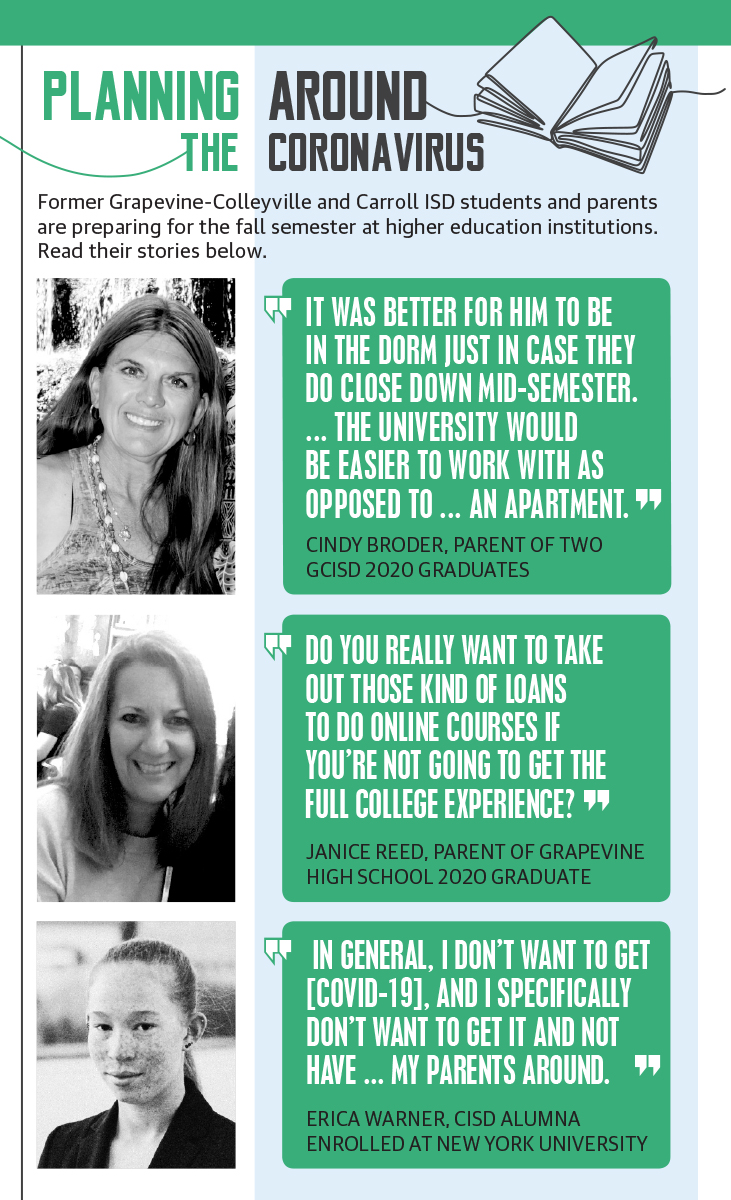 But like those of so many recently graduated seniors, her plans were thwarted as the global COVID-19 pandemic bled into the summer months.

Elizabeth ultimately made the tough decision to enroll at an in-state university. The idea was to save money, said Janice Reed, Elizabeth’s mother.

“Do you really want to take out those kind of loans to do online courses if you’re not going to get the full college experience?” Janice asked. “She made the decision ... not to go, but it was not an easy decision at all. In fact, she’s not excited about her plan.”

As students weigh their options, there have been concerns over the possibility of declining enrollment at Texas institutions of higher education. Millions of dollars have been distributed to Texas colleges, including those most frequently attended by alumni of Grapevine-Colleyville and Carroll ISD graduates, to help offset costs related to the pandemic.
RELATED STORIES

• DATA: See how airports' passenger traffic has changed amid pandemic

• 5 luxury homes to be built on Kimball Ave. in Grapevine

As students and institutions alike wade into uncharted waters and the fall semester looms, here are some of their considerations in the weeks before classes commence.

While Elizabeth chose to change her college plans, other students are heading into their fall semesters as they had originally intended.

Carroll High School alumna Ana Warner is a senior at New York University, where she shares an apartment with her sister, Erica, who is a sophomore at NYU. Ana’s overall objective is returning to some level of normalcy, she said.

Ana’s sister, Erica, said the decision to return to New York has been tricky since most of her friends will reside in the strictly managed dorms, she said.

“If a big part of why I want to go back is to see my friends, this is kind of limiting,” Erica said. “In general, I don’t want to get [COVID-19], and I specifically don’t want to get it and not have ... my parents around.”

Cindy Broder is the mother of two 2020 graduates of Colleyville Heritage High School. Her children, Scott and Sarah, are attending the University of Arkansas and Texas Christian University, respectively.

While Sarah is choosing to commute from home to TCU, Scott will be living in a dorm on campus. “It was better for him to be in the dorm just in case they do close down mid-semester,” Broder said. “The university would be easier to work with as opposed to ... an apartment.”

That doesn’t mean Broder is completely assured about the coronavirus.

“I’m nervous as all get out with him going because he will be in a dorm room with his bed seven feet from the next kid’s bed, and it’s a kid we don’t know,” Broder said.

A SimpsonScarborough study of roughly 1,000 students across the nation in April projected that four-year institutions should prepare for a 10% decline in first-time, full-time students.

A similar poll by Art & Science Group LLC found that one in six college-bound high school seniors were close to giving up on attending a four-year college or university as a full-time student.

As thousands of incoming freshmen grapple with difficult choices ahead of the incoming fall semester, local education establishments are confronting their own sets of problems.

Tarrant County College is one of the more popular choices for Carroll and Grapevine-Colleyville ISD graduates, according to a 2018 report from the Texas Education Agency.

In fact, it was the most popular among GCISD graduates. The University of Texas was the No. 1 choice among CISD graduates in 2018, with TCC coming in at No. 4.

“Tarrant County College is still [weeks away] ... from the start of the fall term, so it’s really too early to know how keeping most of our programs (except a handful of technical programs) online will impact fall enrollment, if at all,” spokesperson Suzanne Groves said in a July 18 statement. “However, the evolving higher education landscape is causing many students to wait a little longer before making a final decision about the fall term.”

However, Groves said there has been recent interest in the college among transfer students seeking to cut their tuition costs amid the pandemic.

Similar data is still being collected for a report compiled by Grapevine-Colleyville ISD regarding graduates’ plans for higher education.

“We collected data from our students in the spring regarding their intent to go to college; however, some may not have completed the survey and others may have changed their plans since May 2020,” GCISD Executive Director of Communications Kristin Snively said in an email.

The question of how the COVID-19 pandemic will affect fall enrollment has sparked statewide action. As announced July 22, a total of $118 million is being made available by the state of Texas through the federal coronavirus relief package to support higher education initiatives.

“One of the best ways to accelerate our economic recovery is to make strategic investments in our future workforce,” Gov. Greg Abbott said in a statement. “These federal funds will provide targeted assistance to keep students enrolled or help them re-enroll in higher education so they can pursue new professional and economic opportunities for themselves and their families.”

The majority of the funding—about $93 million—will go toward the continued education of displaced workers and students whose families experienced negative financial effects due to COVID-19.

North Texas colleges were also on the receiving end of tens of millions of dollars in grant funds at the outset of the COVID-19 pandemic. Tarrant County College received a total of about $22 million, and the University of North Texas received about $29 million.

Harrison Keller, commissioner of the Texas Higher Education Coordinating Board, spoke at a July 23 quarterly meeting about the status of higher education during amid COVID-19. He did not downplay the economic impact of the pandemic will have throughout the state.

“It continues to take an immense toll on Texas, and its full impact and associated costs are still unknown, but we know that those effects are being acutely felt by Texas students and their families, by Texas colleges and universities and by our communities,” Keller said at a July 23 board meeting. “This is the greatest disruption to Texas higher education since the end of the Second World War.”
Grapevine Education Southlake Education Colleyville Education Texas Higher Education Coordinating Board Tarrant County College Grapevine-Colleyville ISD Carroll ISD
SHARE THIS STORY