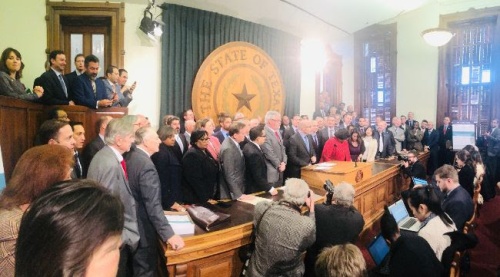 Outcry against high property taxes and recapture payments, along with a desire for quality education, were at the forefront of legislators’ minds this past session, elected officials say. Many lawmakers have expressed enthusiasm about the passage of House Bill 3, a massive school spending bill.

But local school administrators are a little more apprehensive about the bill, expressing some reservations about what these changes could mean for their budgets for fiscal year 2019-20 and beyond.

While both Grapevine-Colleyville ISD and Carroll ISD will see some net revenue gains that neither would have received under the old law, those added dollars are not enough to cover budget deficits, which are compounded by mandated pay raises for district staff.

GCISD, which had to approve its budget only two weeks after Gov. Greg Abbott signed the bill into law, expects to see $3.1 million in overall added revenue.

The $3.1 million will all go to compensation increases, said DaiAnn Mooney, chief financial officer for GCISD. This still leaves the district to grapple with a $6.6 million deficit—about the same amount as the previous year, according to budget documents.

“We’re very appreciative that the state did put money into the system,” Mooney said. “But I think there’s been some misconceptions about how much school districts are actually going to get when everything gets flushed out with House Bill 3.”

Unlike its neighbor, Carroll ISD is not expected to pass a budget until late August. But CISD faces a similar situation, anticipating about $1.8 million in new funds, while still working with a potential $3.8 million shortfall, said Scott Wrehe, CISD’s assistant superintendent for financial services. The district adopted a budget with a $2.4 million deficit in 2018, and this year, the school board has proposed a 4%-4.5% pay raise for fiscal year 2019-20 to comply with new compensation requirements and to retain talented educators.

Gaps in the budget can be covered through savings, Wrehe said.

“There’s still a lot unknown,” he said. “It’ll probably take through this next year [before] we’ll see exactly how this affected us.”

“This is historic,” said state Rep. Giovanni Capriglione, R-Southlake. “I have never seen us work for this long and this hard on any one subject.”

One of the biggest accomplishments touted by lawmakers is that the bill lowered recapture payments across the state. This is money property-wealthy districts send back to the state with the intent to support property-poor districts.

Under HB 3, CISD’s recapture payment will be reduced by nearly $8.9 million, and GCISD’s payment will decrease by about $14 million, according to projections.

For comparison, Dallas ISD is set to save more than $170 million in recapture. Farther south, Round Rock ISD will have its recapture payment completely eliminated based on the Legislative Budget Board estimates.

GCISD and CISD will also see fewer dollars coming in from property taxes—the biggest revenue source for both school districts, according to budget documents.

HB 3 will require CISD and GCISD to compress their maintenance and operations tax rates by $0.07. The law does not affect the interest and sinking tax rate, which districts use to pay off debt. Tax rates are not adopted until later in September.

After this year, HB 3 essentially places a 2.5% cap on property tax revenue growth, limiting how much districts can collect in taxes without calling for an election.

Based on Tarrant Appraisal District’s reports, the compressed rate could potentially save average homeowners in the two school districts about $300-$532 more per year than if there was no change in the tax rate.

The idea is for the state to pick up more of the education costs, Mooney said. But its ability to do that depends on the Texas economy.

“In Texas, we do have a strong oil and gas market, and I think we’ll be fine. But if something happens and it crashes, how are they going to sustain [the system]?” she said. “I don’t want another 2011, which was when they cut funding significantly.”

GCISD anticipates about $6.9 million in state funds for FY 2019-20 while CISD expects about $5.4 million from the state, according to budget documents. For both districts, this is a decrease in state funding compared with what they received last year. State funds will make up about 8% of their revenues this coming year.

In contrast, DISD will see a 4% increase in state funding, which will make up 14% of its budget for FY 2019-20, according to DISD documents.

Neither GCISD nor CISD is seeing much growth, officials said. The exception is iUniversity Prep, GCISD’s online school, which grew by more than 23% between the 2017-18 and 2018-19 school years, according to the Texas Education Agency student enrollment report.

The bill directs districts to spend at least 30% of revenue gains to increase employee compensation, particularly for librarians, nurses, counselors and teachers. Teachers with more than five years of experience are to be prioritized.

There were initial talks of giving $5,000 raises across the state, but many districts cannot afford that. Payroll makes up more than 80% of GCISD and CISD’s expenditures, officials said.

GCISD teachers, librarians, nurses and counselors will see at least a $2,000-$2,500 pay increase—more than required by law, Mooney said. All other employees will see higher wages, as well.

Although CISD has not approved its budget or raises, the school board is considering a 4%-4.5% pay raise—also more than required. But there is a concern about sustainability.

“The last time the state-initiated salary increases, that was right before districts had to start laying off a lot of staff because the funding went away [in 2011],” Wrehe said.

That year, the state cut about $5.3 billion from public education, and thousands of teachers were laid off.

Capriglione said he is encouraged by the changes brought by HB 3, but there is more work needed.

“I do not think of this as ‘done,’” he said. “Every single [session], we have to continue to prioritize this. This is the No. 1 issue in our area.”