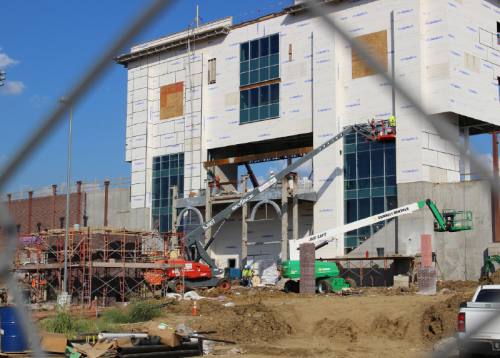 Renovations at Grapevine-Colleyville ISD’s Mustang Panther Stadium will continue through October as progress has been delayed by excessive rainfall, according to an announcement from GCISD Superintendent Robin Ryan. Home games have been moved to allow construction crews more work time.

“It is our hope that by providing additional uninterrupted work time, we will be still able to play football this season in Mustang Panther Stadium,” Ryan said in a statement.

Renovations promote a “new experience” at the stadium, providing for accessibility and safety, improved restrooms and concessions, and a new press box and scoreboard, the GCISD website said. District leaders also commissioned a Walk of Honor recognizing notable alumni, staff and community leaders for their service to the community.

Aside from concrete repairs and security upgrades funded by GCISD’s 2016 bond program, the project is largely supported by $18 million allocated as part of a payout from a Tax Increment Financing agreement.

The TIF agreement, set up in the mid ’90s, was an initiative led by the city of Grapevine, Grapevine City Council Member Chris Coy said. In this agreement the city, along with other taxing entities, share the initial costs of setting infrastructure in place for a development with the understanding they will be reimbursed once that development generates revenue.

“Initially, it was just to reimburse the city because the school district didn’t really have any upfront costs, but where the school district has really benefited is that the amount of additional tax revenue that has been generated by the mall is higher than what was anticipated,” Coy said. “The economic development generated by the Grapevine Mills mall has been in excess of what was planned, and that windfall is what’s funding the stadium renovations.”