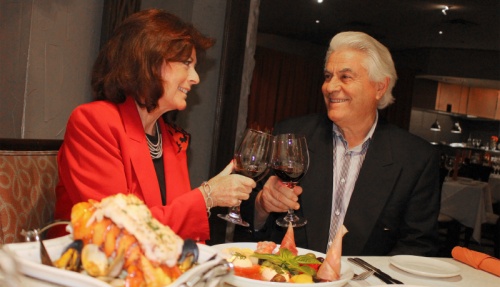 Owners Jane and Francesco Secchi have enjoyed recognition and praise for their restaurant in Grapevine.

Although Ferrari’s Italian Villa has been in Grapevine for 11 years, chef and co-owner Francesco Secchi’s career spans over half a century as he has worked with top chefs and traveled the globe.

He and his wife, Jane, came to Dallas in the early ’80s and opened their first restaurant in 1983 on Market Street in Dallas, where people clamored and waited hours for a chance to dine, he said.

“You could not get in that restaurant,” Jane said. “We wouldn’t even answer the phone because the wait time was two to three hours.”

Since then the Secchis have owned and operated several restaurants in the Dallas area, eventually opening Ferrari’s—named for Francesco’s grandparents—in Grapevine in 2007, Jane said. Here, customers can enjoy made-from-scratch dishes with fresh ingredients grown from the garden outside.

Chefs dress dishes with aged balsamic vinegar and olive oil the Secchis import from Italy, Jane said. On occasion, Francesco can be seen cooking tableside, preparing dishes like veal for customers. In addition to its food, the restaurant has an extensive wine collection.

Throughout his career Francesco has worked in the world’s top restaurants and cooked for many public figures—including the British royal family, the Beatles and NFL athletes—but for him, the experience is more about the food he serves and less about the people to whom he serves.

“I [once] cooked a Steak Diane—one of the most beautiful filet mignons you could put in your mouth,” he said.

Ferrari’s philosophy emphasizes dining as a more luxurious experience than casual eateries, Jane said. Francesco agreed, adding that people should celebrate a meal as its own event.

“Dining is a show,” he said. “People work so hard. They go [somewhere] nice, not where they just eat dinner but to participate in the show that we’re cooking for them.”