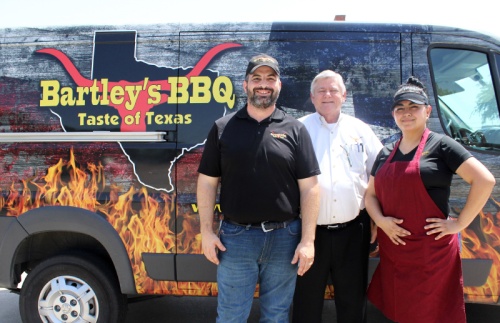 Bartley’s BBQ has attracted barbecue lovers to Grapevine since 1968, and this year the restaurant will celebrate its 50th year in business.

Owens and his family have owned and operated Bartley’s since 1990. In 1995 Grapevine City Hall moved into the restaurant’s original location on Main Street, and as a result Owens moved Bartley’s to its current location off Northeast Highway.

“From the time we bought it to where it is now, I can’t believe the difference,” Owens said. “Now everyone is moving out to this end of town. It’s the place to be, and so the [customer] traffic has picked up tremendously.”

Owens said Bartley’s BBQ is known all over the world—travelers will purposefully schedule layover flights at the Dallas-Fort Worth International Airport so they can stop to eat at Bartley’s.

“We are a small little place in the shopping center, but we really build our customer base because we treat people like we would like to be treated when we go out somewhere,” Owen’s son-in-law and store manager Shane Wilkinson said. “... They are loyal to us because we are loyal to them.”

Although the quality of food is an important asset at Bartley’s, customer service is the first priority, Owens said, which he attributed to his dad who worked at Bartley’s until he was 90 years old.

“Whatever you had to do for that customer to turn them around and make sure they were happy while they were here that day, you did,” Owens said.

Owens said that he plans to keep the business in the family and eventually turn it over to his children and their children after that.