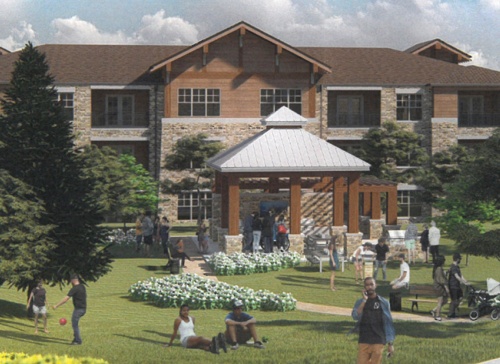 This rendering shows the proposed park area at the Preserve living community in Grapevine.

In February and March city councils received a wave of construction requests for some of the last remaining residential sites left to build out in the cities of Grapevine and Southlake.

In Grapevine residential fill-in is taking place in the form of several apartment complexes and subdivisions, while in Southlake more large, single-family homes will fill the gaps.

Once these sites are built, these landlocked cities will not have much more room for residential development, officials said, and the attention will shift to redevelopment efforts of existing residential areas.

Grapevine Development Director Scott Williams said a lack of residential areas left to develop is a trend not only in the Metroplex, but also nationwide.

“We are seeing some requests [to build residential sites] come forward, [but] there’s just not a lot of property left where they would be viable,” he said. “We have commercial tracts that can still be developed, but there’s not a lot of residential opportunities left.”

Maykus said one thing he likes to specialize in with his construction is to meet the demand for single-story homes, which he is doing with his Grapevine Shady Brook development. Maykus said people at different stages of life buy his homes, and lately he has experienced empty nesters flocking to his subdivisions.

“We realized a huge buyer gap is single-story homes,” Maykus said. “... We’ve got a waiting list of 20 people already [for Shady Brook].”

Area MIG Realtor Theresa Mason said many families and individuals are not looking for homes in any particular city, but rather at a price point—specifically in the $200,000-$300,000 range.

She said first time home buyers could typically find a place to live in Grapevine, but as the market has changed it has become harder to find less expensive homes.

“We used to be able to sell smaller homes for $150,000 or $200,000 in Grapevine, and now we’re having to spread out a little bit from there,” Mason said. “... I think we’ve found several people that want to be in this area, but are looking at Grapevine just because maybe they can afford it more. But it’s still a tough market there.”

Southlake is catering to a buyer with a higher price range with its newest residential plan. The Stony Brook custom-home community will have sites for large homes with prices ranging from $950,000 to more than $2 million.

“We believe Stony Brook will be a great place for Southlake buyers to find more innovative housing designs with a higher level of interior designs,” said Megan Lozano, executive assistant with Holmes Builders.

Lozano said the development for these homes should begin in June, and home construction will start the first quarter of 2019. Stony Brook is in Keller ISD but has access to Carroll ISD through the open
enrollment program.


A focus on redevelopment

Mason said Grapevine, Colleyville and Southlake all offer attractive amenities to homebuyers, such as proximity to the Dallas/Fort Worth International Airport, good infrastructure and highway systems, universities, great shopping and restaurants, and good
school districts.

As the cities get close to build out residentially, those community factors will drive redevelopment, Farley said.

“The train district is a great example of that,” Farley said. “There’s a lot of property in there that’s in use that probably won’t be in that same use in a few years from now. But how much of that is going to be housing-based versus how much of that might be office or some additional retail, it’s a little hard to tell until the train station gets built and then you start seeing some direct involvement from developers.”

Williams said once residential lots have all been developed, areas will have to be rezoned for new residential construction, if that is what the market dictates. Mason added that people can also buy preowned, or do what many families in Dallas do and buy a preowned home on a lot, tear down the house and build to suit. Other than that, they may have to find a place to build somewhere else.

“Unfortunately it’s getting a bit more landlocked,” Mason said. “… You have to get a little further out if you want to build a custom home. There still are a few lots, but just not as many as we would hope [in Grapevine, Colleyville and Southlake.]"
SHARE THIS STORY