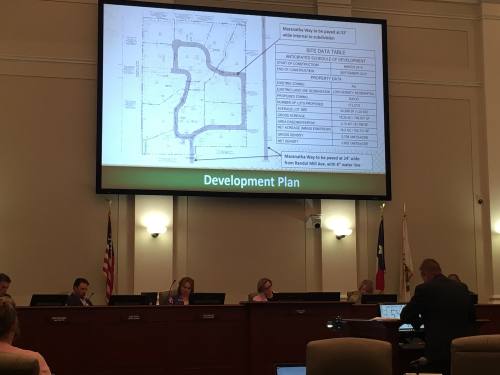 Southlake City Council gave its preliminary approval Oct. 1 for a zoning change and development plan for a residential neighborhood on the west side of the city to be established.

It was the first reading for a proposal to develop 13 single-family residential lots on about 18.4 acres on Maranatha Way east of FM 1938. The site is directly adjacent to the city of Westlake and will be developed by Trium Development Partners.

Lots are to be at least 43,560 square feet, according to city documents. Because of “excessive flood plain and drainage accommodation,” there will be no common open space within the neighborhood.

Lot owners will automatically be members of the Maranatha Residential Homeowners Association. The association would be governed by a board of directors, which will meet quarterly.

An existing home exists on the property, but it will be removed, said Dan Anderson, principal of Trium Development Partners. Twelve of the 13 lots are already owned by local residents who wish to build homes on those lots.

Work will also be done to connect Maranatha Way to Randoll Mill Avenue.

The proposal came before City Council at an earlier meeting, but it was tabled after council members asked the developer to address a couple of concerns, including access from FM 1938 and the use of septic tanks.

Mayor Laura Hill asked that the developer include a direct connection to the subdivision from FM 1938. But after discussing the matter with the Texas Department of Transportation, a roadway does not seem viable at this time, Anderson said.

“[The neighborhood] will be accessed from Maranatha Way,” he said. “We were asking [TxDOT] if we could have a driveway that directly accessed [FM 1938], which is a TxDOT road. We were asking for their help to get Westlake to approve our access, and they were not able to do that.”

Any future homes to come into the lot would have to be serviced by septic tanks because Southlake does not have sanitary sewer pipes close to the property, Anderson said. It is not feasible to tie into Westlake’s sanitary sewer system, either.

The first reading for the development was approved with a 5-0 vote by Southlake City Council. Council Members Shahid Shafi and Chris Archer were absent from the meeting. A second reading will take place at a later meeting.