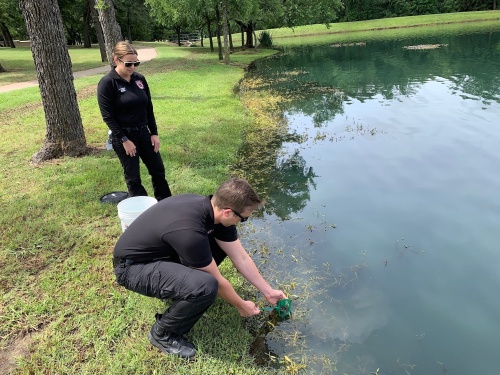 The city of Southlake is exploring a more natural method to reduce mosquito populations: the gambusia fish—also known as the “mosquitofish.”

Gambusia fish, measuring about 6.5 centimeters, are known to prey on mosquito larvae, according to the United States Geological Survey. Some public health officials consider it an attractive alternative to insecticides.

The Southlake Office of Emergency Management has partnered with Tarrant County Public Health to introduce gambusia fish to a pond in the Myers Meadow subdivision as part of a pilot program. The neighborhood is located north of Southlake Boulevard and west of Peytonville Avenue.

“Gambusia are native to Texas and will not disrupt the normal ecosystem,” Vector Control Specialist Joe Carr said in a June 17 news release from Southlake.

There is a 200-gallon tank from which a city can harvest as many fish as it may need. The fish are then placed in isolated water sources that may be breeding mosquitoes, Dacko said in the email.

This is the first year Southlake has opted to participate, Emergency Management Coordinator Amanda Meneses said. The fish were introduced into the Myers Meadow pond June 17.

“It has been a terrible wet season this spring, so we are trying to go into mitigation mode to try to help reduce the mosquito population before it gets too bad,” she said.

The city sets mosquito traps every week from April through November, Meneses said. Samples from these traps are tested for West Nile virus by TCPH.

Southlake officials will be monitoring the traps to see if there is a reduction in the mosquito population or positive test results. If the program is found to be effective, the city will look at introducing more gambusia fish in other locations next year.

Gambusia are quite small and do not typically go after bait, so the city does not expect there to be an issue with fishing, Meneses said.
SHARE THIS STORY