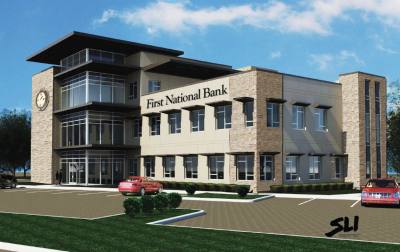 If the zoning change request and site plans pass a second review by City Council, First National Bank will move to a not-yet-built three-story building of 16,000 square feet. It would sit on 2.2 acres of land, which is part of a larger tract of 6.9 acres.

La Paloma Holdings LLC owns the land. The company is under contract to sell the 2.2 acres if the request and site plans are approved, said Mike Mills, representing the company. It will still own the remaining tract.

The building would feature a two-lane drive-thru for banking services, according to meeting documents. First National Bank expects to see about 60 vehicles circulating through the area per day based on traffic counts from November 2018 to January 2019. The bank will be accessible from the SH 114 frontage road.

There were residents who had concerns about preserving green space, parking, traffic and noise, and flood and water detention, said Cindy Campbell, president and CEO of First National Bank.

Campbell has met with many residents to address their concerns, and plans have been revised to reduce parking spaces from 76 to 58, include wider sidewalks, eliminate access from Shady Oaks Drive and increase the size of the buffer yard for nearby neighborhoods.

Residents have expressed preferences for a more natural buffer with plants over a masonry wall to line the property, Campbell said.

“I understand there’s pushback on the site, but I think a lot of the things [discussed], we can fix,” Mayor Laura Hill said.

Hill said she does not have an issue with the land being used for a bank because it is a quiet business, but she would like to see more work done to preserve the land’s natural space.

Based on the city’s tree-preservation ordinance, the site must maintain 40% of its existing trees, according to meeting documents. But the applicant is proposing only to maintain about 31% of them.

Council Member John Huffman said he thinks the bank can meet the city ordinance without jeopardizing its plans to build on that land.

“We’re talking about moving [plans] on from first reading to second reading, but I’m going to be uncomfortable doing that without a commitment to try to get to that 40% or real close [to 40%],” Huffman said.

Campbell said it is a matter of balancing tree coverage with parking spaces.

Because it is part of a larger tract of land and there were several variance requests to accommodate design plans, there is a concern about how future developments will fit in with the area.

Hill said she would like to see a comprehensive concept plan for the entire tract. The owner could sell the land to other buyers to develop it, which could lead to an issue with cohesion in the future if a plan is not in place.

“I don’t like to carve off little pieces [of land] and approve them,” Hill said. “I like to see what the whole plan is going to be.”

There is not a future use plan at this time, said Mills said.

Huffman agreed with the mayor, saying he would not feel comfortable approving the bank without an overall concept plan.

“We have a precedent for looking at sites like this as a whole, at least on a conceptual level, and I don’t think this should be any different,” he said.

Council members ultimately gave preliminary approval to allow the bank’s relocation on the condition it will work to address these concerns. They directed First National Bank to provide a revised parking plan, provide details on the building and parking lot’s lighting, and present a rendering of SH 114 entrances as related to signage and landscaping. They also requested a comprehensive concept plan for the entire tract from Paloma.

It was a 6-1 vote with Huffman voting against. City Council will review and vote on the project, along with potential revisions, a second time at a later meeting, at which residents will be able to submit public comments.
SHARE THIS STORY

Carroll ISD Superintendent Lane Ledbetter said the district will be reviewing its harassment and discrimination policy as part of its safety strategies.

Shannon Braun sworn in as newest Grapevine-Colleyville ISD board member

The board also elected new officers, including Jorge Rodriguez as president.

The new downtown Spa on the Square offers private salon suites for rent to licensed and independent beauty professionals in Colleyville.