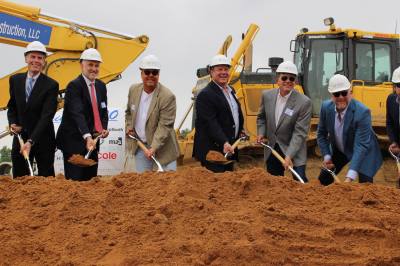 A groundbreaking event was held May 22 for the upcoming Delta Marriott Southlake, which will be built on the southeast corner of SH 114 and North White Chapel Boulevard.

A groundbreaking event was held May 22 for the upcoming Delta Marriott Southlake, which will be built on the southeast corner of SH 114 and North White Chapel Boulevard. RREAF Holdings is the developer for the project.

Amenities include an outdoor pool, a bar and restaurant, meeting space and a ballroom, according to an April news release from the city of Southlake.

“There is no better location for such a development anywhere in the state of Texas than the corner of White Chapel and SH 114 in the city of Southlake, Texas,” RREAF President and CEO Kip Sowden said. “This is going to be the first phase of a multiple-phase, mixed-use development, which eventually will include up to 240,000 square feet of Class A office space, restaurants [and] retail, all on this site.”

City Council approved plans for the hotel in January 2017, and the site will be part of a larger, mixed-use development, the Delta Southlake Center, according to the Southlake news release. The idea is for the development to eventually include office buildings and retail space.

Only work for the hotel has started, and any future buildings will require approval from City Council, according to the news release. Construction work may take 16-18 months, and officials expect it to open in 2020.

“We admit and we brag that we have high standards here in the city of Southlake, and the fact that we’re here today getting ready to break ground means that this team has met those standards,” McCaskill said. “[They] have gone above and beyond those standards.”

It will be the city’s third hotel, after the Cambria and Hilton Southlake, said Daniel Cortez, deputy director for economic development. A Westin Hotel is also in the works to come along SH 114, near the Gateway Church. It is likely the Delta Marriott will be completed before the Westin, he said.
SHARE THIS STORY

Carroll ISD Superintendent Lane Ledbetter said the district will be reviewing its harassment and discrimination policy as part of its safety strategies.

Shannon Braun sworn in as newest Grapevine-Colleyville ISD board member

The board also elected new officers, including Jorge Rodriguez as president.

The new downtown Spa on the Square offers private salon suites for rent to licensed and independent beauty professionals in Colleyville.