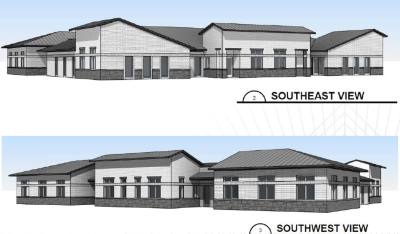 Applicant Landmark General Contractors received approval from Southlake City Council on May 21 to expand an existing office building at 750 N. Carroll Ave., Southlake. The expansion had been a topic of discussion since 2018.

Landmark proposed constructing an addition to the existing 6,600-square-foot, one-story building on its west side, according to meeting documents. With the addition and other improvements, the development would total 11,839 square feet.

It will be divided general and medical office space and have a total of 60 parking spaces. The applicant also plans to install sidewalks along both North Carroll and Lakewood Drive, which runs along the property’s southern border.

The building site is directly adjacent to some residential properties. The contractors presented plans to include an 8-foot wooden board fence with some trees along the border of the development and homes.

An earlier version of the plan attracted opposition from several residents living along Lakewood because the applicant suggested installing a commercial entrance on Lakewood. Letters were submitted expressing concern for increased traffic issues.

City staff presented a few options to help alleviate traffic congestion long-term, said Ken Baker, senior director of planning and development services. These options include working with the Texas Department of Transportation to redesign medians and reconfigure lanes on Carroll, which could take as long as a year.

Site plans have been revised to leave the commercial entrance as it currently is on North Carroll. As a result, many residents have changed their opinions and submitted records to support the project.

Huffman and council members Ronell Smith and Chad Patton took their oaths of office following their wins in the May 4 election.
SHARE THIS STORY

Rockbox Fitness in Southlake offers boxing and kickboxing classes in a community setting.

Despite the COVID-19 pandemic, Southlake's sales taxes for 2020 showed a 2% revenue increase compared to 2019.

The first of its kind in Texas, the store offers a curated collection of styles handpicked by local influencers in its 2,000-plus-square-foot space.

Price is the second candidate to join the race for Tarrant County judge. Her announcement comes just days after current Judge Glen Whitley said he will not be seeking re-election in 2022.