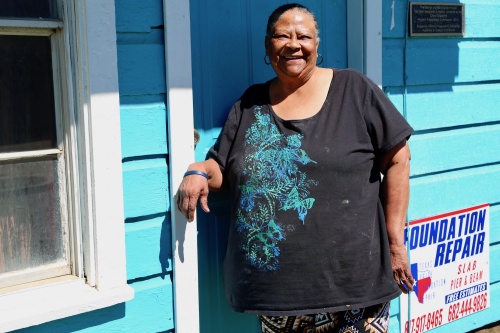 Nonprofit 6 Stones launched its Community Powered Revitalization program for the first time in the city of Grapevine on April 5. In the CPR program, the city works with 6 Stones, other nonprofits, churches, businesses and volunteers to complete home repairs for struggling residents.

Hundreds of volunteers came out April 5 to help with work at various homes, including seven in Grapevine, 6 Stones Executive Director Jennifer Leney said. Among the seven properties was the 700th home that 6 Stones has helped repair in its 10 years of existence.

A second day of work was scheduled for the following day but was postponed to April 27 because of rain, 6 Stones staff said.

To qualify for CPR, residents must be homeowners who have a financial or physical need for assistance and have lived in the house for at least two years, said Adrianna Watson, director of operations for 6 Stones.

“Homeowners apply through the city of Grapevine, and a committee at the city reviews the applications to verify that there is a financial or physical limitation that prevents the homeowner from maintaining that home,” Watson said.

The multidisciplinary committee typically comprises city officials and staff, Watson said. The program provides an important tool to residents who face citations for code enforcement violations but struggle to correct them.

Twice a year, volunteers go out to the community to help these homeowners, Leney said. The city pays for a portion of the repair costs, and the rest is covered through sponsorships and donations from businesses, other organizations and private citizens.

In a 6 Stones video, Freed said the CPR program is needed in Grapevine because rising property values and a drive for economic development have driven up the cost of living throughout the years.

“We can’t forget the people that have lived here a long time that, maybe, their house is worth a whole lot more than they ever paid for it—but they can’t really afford to move or go anywhere, and they don’t have the ability to do the things that need to be done to keep their house out of disrepair,” Freed said in the video. “We have to do what we can to not forget and to make sure that we take care of all those people. This community belongs to them as much as, if not more than, anybody.”

The nonprofit also has other community events and programs to benefit families and individuals in the area. More information about 6 Stones and its different programs can be found here.