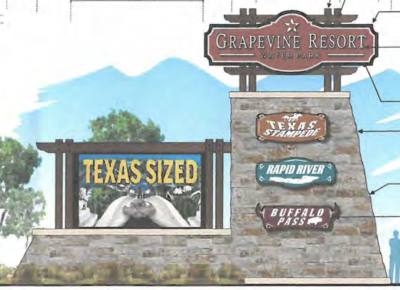 Grapevine City Council approved attraction overlays for the new Stand Rock Resort and water park in Grapevine on Dec. 18, marking a step forward in the development initially approved in 2016.

Stand Rock will be Grapevine’s third water park, and it will be located within 3 miles of the city’s two other water parks and resorts, Great Wolf Lodge and the Gaylord Texan Resort, at 3509 N. Grapevine Mills Blvd., Grapevine.

The attraction overlay provides for variances not permitted under the current zoning, such as for height restrictions and entertainment options such as outdoor dining, miniature bowling and a ropes course.

"Stand Rock Grapevine will establish a competitive advantage by designing distinctly different and a significantly broader array of amenities than those that exist today at other water parks within the area," a letter from Stand Rock to the city of Grapevine dated Dec. 7 said.

The amenities mentioned include expansive waterslide offerings, an entertainment center and Texas-themed guest rooms, according to the letter, citing the resort design is inspired by Grapevine history.

"The rugged pioneer style takes its design cues from the culture and geography of North Texas," the letter states. "The conceptual design for the Grapevine project utilizes Spanish Mission architecture. The resort interior design will reflect the various cultures and lifestyle of the people that have historically called Grapevine home."

Applicant Stu Zadra said the resort would have a restaurant, buffets and a snack bar in his presentation at the meeting. He said despite the proximity to other resorts, he assured the council Stand Rock "competes effectively."

In addition to the hotel, the resort will also have timeshare condominiums available.

The planning and zoning commission and the council expressed some concerns with the proposed height of the signs for the development but also expressed their enthusiasm for the resort as a whole.

"It's a great project," Council Member Mike Lease said. "I can hardly wait."

The city of Colleyville will host its annual Christmas tree lighting ceremony, which will include live reindeer, a farmers market, a drive-in movie and more, on Dec. 3.

Volunteer Guide: 11 ways to give back in Grapevine, Colleyville and Southlake

For those looking to help out in the Grapevine, Colleyville, and Southlake communities, there are several local nonprofit groups that offer volunteer opportunities and accept donations.

Panera Bread on Southlake Boulevard is now closed. A reason for the closure was not shared.