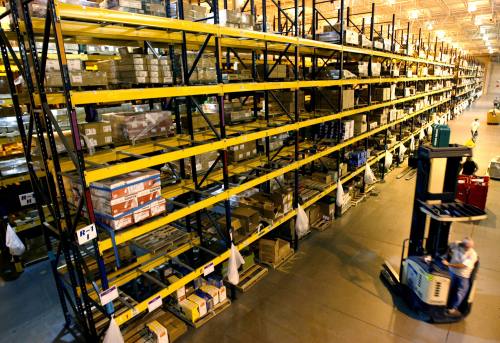 Shelves are stocked at an Amazon fulfillment center in San Marcos.

The city of Grapevine is weighing a potential bid to be the newest Amazon.com Inc. headquarters location.

In a press release Thursday, Amazon announced it is opening a search for a second headquarters to operate alongside its Seattle facilities.

With a $5 billion investment in the construction of Amazon’s second headquarters, the company would bring an estimated 50,000 jobs to the community selected. The Greater Austin Chamber of Commerce and the mayor of McKinney said they will also bid to bring Amazon to their cities.

"It puts people on the map, having a corporate headquarters in their city," Farley said. "It's one of the best-recognized companies, certainly one of the largest."

To that end, he said, the city is looking at preparing a proposal to bring Amazon to the area. The steps for that proposal include gathering information on potential sites and examining what incentive opportunities may exist as well as compiling market and labor force data.

"This is still in the early stage," Farley said. "We got this last Thursday, so I think everybody is still trying to figure out how best to be competitive."

Amazon listed qualities its ideal location would have, such as proximity to a major airport and roadways, items Farley pointed out Grapevine possesses.

"Our highway access is really strong, and we can draw, labor-wise, from pretty much a 60-mile radius of the DFW area," Farley said. "We just generally have a good business climate."

Mark Wood, Colleyville interim assistant city manager, said in an email that his city would not be submitting an application for the second Amazon headquarters due to not having a site to meet the company's requirements. He added, however, that he knew the regional economic development groups throughout Dallas and Fort Worth are coordinating a regional response to Amazon's listing.

"We certainly support the DFW region and will do what we can to win Amazon for this area," Wood said in his email. "This would be a huge victory for the entire Dallas/Fort Worth Metroplex."

Requests to the city of Southlake to gauge its interest in the second Amazon location were not immediately returned.