Since the first car dealership opened along SH 121 in 1995, the system of highways connecting the metro area’s four most populous counties has become home to 18 dealers, with at least two more expected to open soon.

The city of Grapevine does not offer any incentives to lure them to this stretch of highways known as the DFW Connector. What does attract dealerships is the 150,000-200,000 daily vehicles passing by, per the latest state estimates.

The household income of nearby cities, higher than state and national averages, is also key.

This success has caught the attention of many car manufacturers looking to break into the market. Over 15 brands of both luxury and affordable cars are available along the DFW Connector. Coming soon is a Volkswagen dealer, which will be joined by Chinese automaker Vantas and Karma, an electric carmaker.

“With [Karma’s] move to Grapevine, we have the right partner in the right location to support us in growing our business,” said Joost de Vries, vice president of global sales and customer experience at Karma Automotive.

A history of successful sales

The DFW Connector consists of several major roads, including state highways 121, 114, 26 and 183 and Loop 360. For many, moving to the DFW Connector proved beneficial for company sales and clientele needs. 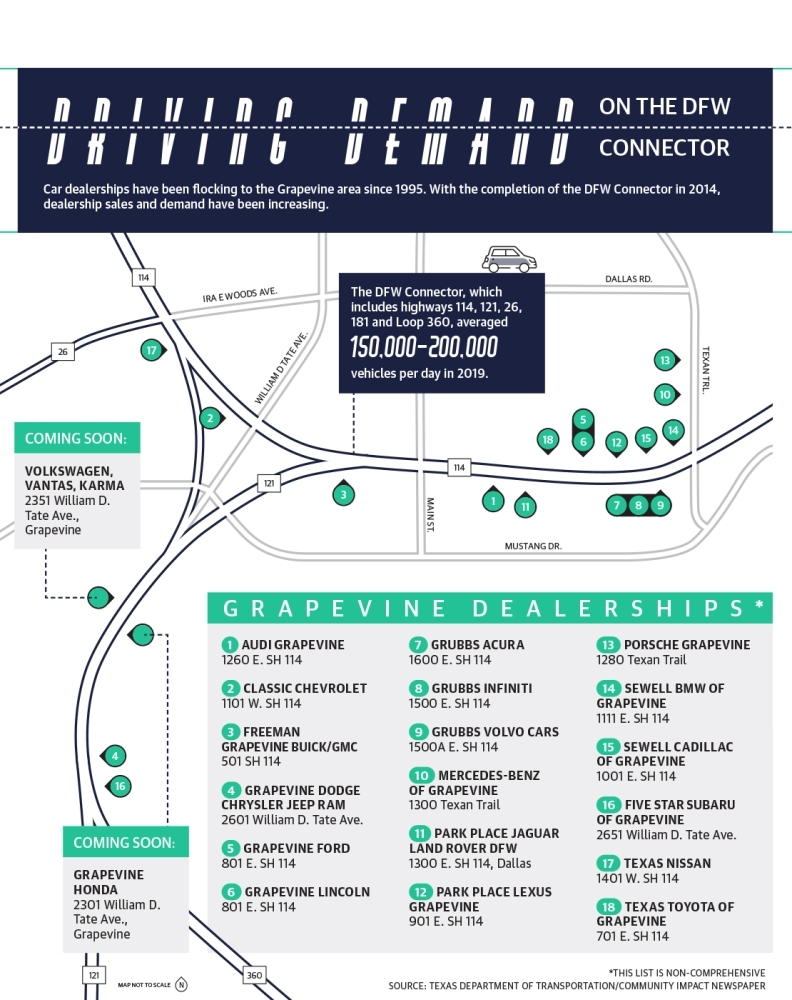 George Grubbs III, fourth-generation owner of the Grubbs family of dealerships, said he decided in 2012 to move his Infinity dealership from Euless to Grapevine after seeing the success of others. The move was completed in 2015.

Overall business went up by 140% in less than a year after the move, Grubbs said.

“The amount of traffic into the store is four times what we saw when we were in Euless,” he said.

Tony Carimi, Park Place Dealerships managing director, said the company has seen major growth since settling in the area in 2000 with its Lexus dealership. The company added Jaguar and Land Rover in 2017.

“The overall growth and health of that [Lexus] dealership from 2000 through 2021 has grown both in sales and service volume,” Carimi said. “The Grapevine area and the surrounding communities... really contribute a lot to the demand.”

“[Tom] knew if there was an international airport that that would draw a lot of people moving here. And he knew... Southlake, Grapevine [and] Colleyville would expand,” he said.

Jimenez said the dealership is currently ranked the No. 1 in sales in Texas among all Chevrolet dealerships.

While services are provided to all, the majority of customers come from neighboring communities, such as Grapevine, Southlake and Colleyville. The area median household income starts at $90,000, according to the 2019 American Community Survey.

“If you think about our brands, they align very well with their desire to drive the luxury vehicle,” Carimi said.

According to the Census Bureau, nearly 50% of Grapevine, Southlake and Colleyville households have two vehicles versus 36.9% nationwide.

“As long as at least one of [their cars] is a brand I carry, then that keeps me in a relationship with that client,” Grubbs said.

The move of major corporations like Charles Schwab and Varispace to the area has attracted a lot of new clientele from California and the Northeast, Jimenez said.

“They’re moving over here, and they’re getting these big houses... when they get a big house, they want bigger vehicles,” he said.