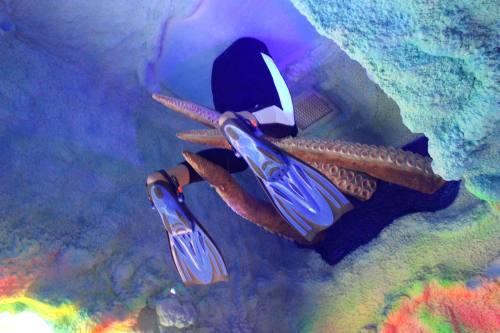 One room follows an under-the-sea theme.

As opposed to many traditional galleries, Pic-OlOgy does not lock its art behind glass frames. There are no signs to deter touching or standing too close to installations. In fact, guests are encouraged to pick items up and examine the art more closely in this interactive gallery.

“I want to make it [so that]
anything in the room they can touch, they can mess with—and if something happens, we'll just make it again,” owner Crystal McGee said.

McGee opened Pic-OlOgy because she wanted to encourage people to form connections and to see the world beyond their cell phones. McGee said she has never done anything like this before but was motivated by her grandparents, Sam and Mary Harrington.

“[My grandfather] just thought that was the funniest thing ever,” she said. “He was like, we should do that, [have]
a place where people can come and play ... and just make other people laugh.”

McGee was able to realize this vision and launched Pic-OlOgy in September. The process of getting the venue ready sparked an interest in McGee's social circle as those close to her got involved in designing the installations.

“It's fun to watch them, and then the creativity comes out,” McGee said. “I've never seen that part of them. They figured it out. They put the colors together. It came out spectacular. I don't think they would have been interested in something like that before.”

Visitors can navigate the building’s winding path to glimpse and play in each exhibit, which features a theme or optical illusions.

In the rooms, McGee has managed to add personal touches: dedicating a display to “The Wizard of Oz,” a favorite movie from childhood; using items that reflect her children’s styles and interests; and eliminating ticket prices for veterans as a tribute to her grandfather, who served in the Army.

McGee drew inspiration from other artworks she has seen online and in museums. One room highlights the work and imagination of regional artists Caleb Cannon and Daniel Bryant.

The gallery also invites a level of introspection with prompts that asks guests to reflect on their experiences. The words “I am” are plastered to one corner of the entrance. Participants can write their feelings on provided stickers, and the intention is to fill up the space with notes from each guest, McGee said.

“I think the littlest things that people do touch our lives and change [us]
without them ever knowing,” McGee said.

She said she hopes others will see the same value in Pic-OlOgy as her grandfather did.