Renata Salons styles its services to stay current and connected 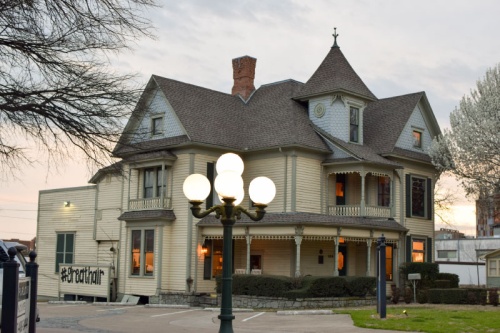 Renata Salons is located inside this historic house in Grapevine.

When Lauren Jackson opened Renata Salons with her mother on Jackson’s 21st birthday, she was not sold on her mother’s choice of location. Grapevine’s Dorris House, the three-story house off Main Street dating back more than 120 years, was far from the style she had seen at other salons.

Over 14 years later, she said she is incredibly thankful the house became Renata’s home. What started out as a creative business project between Jackson and her mom, Sherry Welch, has become three distinct salons all connected to the historic property and Jackson and Welch’s family.

Jackson said she had been doing hair since she was 17, working as a styling teacher and hairstylist for editorial works in Los Angeles and New York before settling back down in Grapevine. Her background fed into the way she runs her salon, which has a significant devotion to staying on top of recent trends.

The salon is constantly feeding its stylists with education, Jackson said, holding classes at least once every two months. Recently, Jackson invited the top educator at hair color line Wella to teach a class at Renata, and last year she paid for six of her stylists to attend classes in New York.

“[Education is] inspiring your stylists, and any time your stylists are inspired, they’re doing new things to their clients,” Jackson said.

Renata expanded in 2013 with Parlor House, a shakeup of the more feminine original brand. Where Renata was old Hollywood, Jackson said Parlor House was Los Angeles or Austin, an edgier spin to reach customers going for a different look or atmosphere. Last year, the salon remodeled the floor above Renata into the 2nd Floor Barbershop, a more masculine alcove for male customers, spearheaded by Jackson’s husband.

Renata holds several events, including parties, photo shoots and charity events, at its downtown location, and it is part of Grapevine’s Candlelight Tour of historic homes. Jackson said she loves running the salons in Grapevine.

“You can get lost in a city,” she said. “… I see familiar faces everywhere I go, and ... it’s just unlike any other place I’ve ever lived because of that.”

Renata’s projects go beyond its three Grapevine salons. Lauren and Chris Jackson have also partnered with the nonprofit SOS International to begin an outreach project in Costa Rica. The Jacksons traveled to the country in March for their first of hopefully many hairstyling classes for single women to provide the local women with career options.

“Prostitution is legal in Costa Rica, and a lot of times mothers who can’t afford to put food in their babies’ mouths will do whatever they can to provide for their children,” she said. “This is kind of our way of helping that situation, by giving them a career.

“Our grand idea is hopefully to open a salon out there so that we can not just teach these women, but then also hire them,” she said.