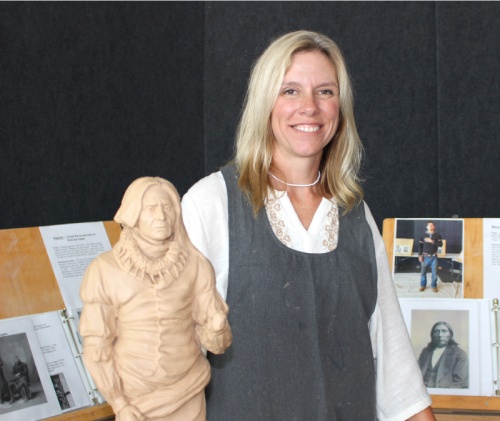 Sculptor Linda Lewis was chosen to create the Peace Circle for Grapevine. It is a public art project expected to be complete in 2021.

Grapevine-based artist Linda Lewis is in the midst of what she considers the “Super Bowl” moment of her career. She was tasked with helping Grapevine honor a historic event with an art installation dubbed the Peace Circle.

Grapevine commissioned Lewis to give life to the moment Sam Houston, president of the Republic of Texas, met with leaders of various Native American tribes to negotiate a peace treaty. One initial gathering took place in August 1843 in what is now Grapevine, according to the project advisory committee.

The Peace Circle commemorates that meeting. The art piece will feature Houston and chiefs of 10 tribal nations: the Delaware, Chickasaw, Waco, Tawakoni, Keechi, Caddo, Anadarko, Ionie, Biloxi and Cherokee. They will be immortalized in 11 life-size bronze sculptures, forming the Peace Circle. City Council approved $895,000 to carry out this project at a July 2018 meeting. The money comes from the city’s Public Art Fund and the Convention and Visitors Bureau Fund. The art fund is not supported by taxpayers, Chief Financial Officer Greg Jordan said at the meeting.

It will be placed near the intersection of Main Street and Dallas Road as part of the new Grapevine Main, which will comprise the upcoming rail station, Hotel Vin and outdoor plaza.

“[The historic meeting] was a pivotal moment,” Lewis said.

Lewis is the owner and operator of the Grapevine Foundry, a fine art space that creates and services sculptures. Lewis has been sculpting for about 23 years. One of her most prominent pieces includes the flying unicorn poised atop the Grapevine Convention and Visitors Bureau building.

Lewis has done extensive research in the year and a half she has been involved with the Peace Circle project.

“I want you to feel that they are real human beings,” she said.

Lewis will include details of their individual culture in the way they are dressed and how they are positioned.

Lewis met with representatives from each tribe to better understand the people she is depicting. Accuracy and respect were her top priorities, she said.

“We’re giving honor to them,” she said. “They were here before us. They were removed. This peace treaty was the last time they were here on this land.”
SHARE THIS STORY