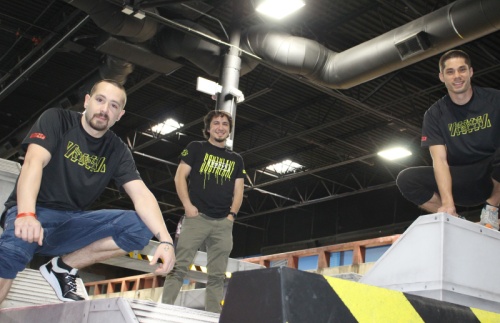 With origins traced to Europe, the sports of freerunning and parkour attracted attention in the U.S. around 2008, ushered by the internet, freerunner Shane Daniels said.

Daniels has been coaching others to practice freerunning since 2012 when Tempest Freerunning Academy opened its first gym in California. The academy made its Texas debut with a grand opening Dec. 2 in Southlake.

Parkour and freerunning are similar—both often involve scaling walls, making daring jumps and maneuvering around obstacles. However, parkour means getting from point A to point B as efficiently as possible while freerunning emphasizes style more, TFA manager Aaron Brown said.

TFA’s gym in Southlake features a spring floor, trampolines, wood structures and an air bag allowing individuals to practice freerunning and parkour safely. Classes are available for people of all skill levels, Brown said. Children as young as 4 years old can participate and learn how to do it safely.

TFA has a professional team of sponsored athletes who train and freerun competitively, Daniels said. Competitions are scored by judges based on fluidity of movement, difficulty of the stunts and execution.

“We’re trying to progress this sport like it’s the X Games or the NBA,” he said. “Tempest is a very rare thing. We pay athletes. We treat them like they’re professional athletes.”

TFA also has an action team of stuntmen and stuntwomen who have appeared as stunt doubles in notable action films, and instructors help actors and actresses train for roles.

“I worked on ‘Spider-Man: Homecoming,’” Daniels said. “I doubled [for] Dylan O’Brian on the first two ‘Maze Runner’ movies.”

Many TFA employees and the founders do stunts professionally, but the real passion lies with the sport, he said.

“When we work a stunt job we earn a lot of money, but this is our passion,” Daniels said. “This is what we do.”