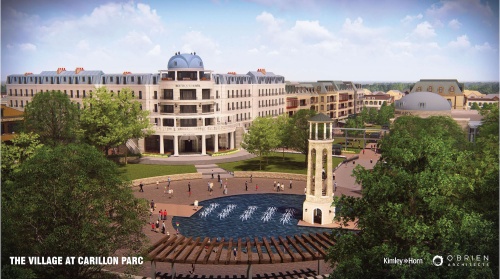 The Village at Carillon Parc will contain retail, restaurants, lofts and park space.

The Southlake Planning & Zoning Commission approved a development plan May 17 for approximately 42.51 acres for a project to be known as Carillon Parc.

This project is part of the Carillon residential community that sits on 285 acres of land between North White Chapel Boulevard and Carroll Avenue on SH 114.

Former Southlake mayor and one of the developers for Carillon Parc John Terrell told the commission that the vision of this development included several components, including:

The location would also be the future home of the Southlake Public Library, Terrell said. This version of the development would also preserve about 9 acres of trees to promote an atmosphere that helps the project feel already established, rather than new, he said.

"We want to draw youth and all ages," Terrell said. "… We believe we’ve hit that."

Carillon Parc would be divided into eight primary districts: an office district, the Boulevard,  the Piazza, the Library, the Parc, the Terrace and the Grand Hotel. Terrell went into detail on each of those districts.

The Piazza would be at the heart of the development and is an artisan retail space with experiential shopping stands, outdoor cafe dining, a central park space and a central civic fountain.

The Terrace, named for its topography that descends about 15 feet toward the east of the central bell tower, would feature chef-driven unique dining options.

The Grand Hotel would be an exclusive hotel with a connected wellness center and would have a parking garage, pool deck and retail.

The Library's design also features access to a parking garage and covered parking with a pedestrian bridge coming down from the parking garage. The two-story civic library is designed with space for educational programming on the first floor and a conference center and event space on the second floor.

The Parc is envisioned as a large open space within the preserved tree stands and features trails, a central lawn, a wildflower meadow and an outdoor amphitheater.

Terrell pointed out that his presentation is just a vision at this stage. Each piece and building in the development would be presented before the Southlake City Council before being constructed.

Mayor Laura Hill will lead a public meeting June 4 to update Southlake residents and the city’s boards and commissions members on the proposed development.

The Carillon Parc development is scheduled to go before the Southlake City Council on June 5.

Terrell said if the project is met with favor and approval, developers would seek to start construction by the first quarter of 2019.