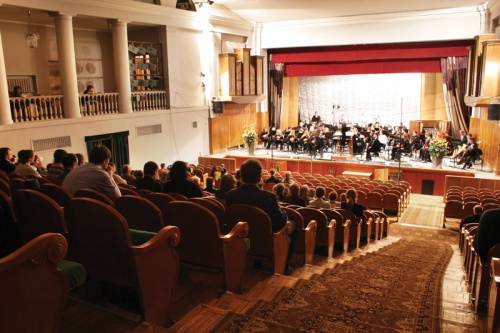 Both the city and Frisco ISD are looking into a possible performing arts center.

More funds could be on the way to make a performing arts center in Frisco a reality, but money is not the only thing the city has been waiting on to bring a center to life; both city and school district officials said they want a private partner to take the reins on a project.

“The City Council has taken a very consistent approach saying that the performing arts center is going to be driven by the private sector,” Frisco Mayor Jeff Cheney said. “The city doesn’t have an interest in owning and operating a performing arts center; government isn’t good at that. But we think we’d be a good partner in those efforts.”

Frisco ISD is putting a $691 million bond proposition before voters Nov. 6. In the list of capital projects the bond could pay for, $43 million is planned to go toward a fine arts auditorium for students to use for performances, rehearsals and classes. The $43 million would be enough to build an auditorium without a private partner, according to district officials, but several FISD board of trustees members have said the hope would be to find a partner to help with the cost.

Should the city and the school district decide to partner in a project, Cheney said Frisco’s and FISD’s combined bond funds would total $57 million, bringing the city one step closer to the ideal public funding for a center to incentivize a private developer.

While the city waits for a private partner to come forward, many Frisco arts groups are either making due with facilities available in Frisco or leaving the city to perform in other spaces.

Frisco Arts Executive Director Tammy Meinershagen championed a performing arts proposition in 2015, proposing that the city’s Citizen Bond Committee add the measure to the bond package. A $10 million bond proposition was approved by Frisco voters that May.

Three years later, Meinershagen agrees that a private partner should be involved in an arts center.

Both Cheney and Meinershagen pointed to a public-private project in Lubbock as inspiration for what a partnership could look like in Frisco. The Buddy Holly Hall of Performing Arts and Sciences includes a 2,200-seat main theater, a 425-seat studio theater and a multipurpose room. The hall is being created through a partnership of the Lubbock Entertainment/Performing Arts Association, the city of Lubbock, Lubbock ISD and Ballet Lubbock.

Cheney said FISD has been a partner in other projects—such as The Ford Center at The Star in Frisco—and would be an ideal partner for a performing arts center as well.

FISD has talked with the city about a possible partnership, though officials have said no decision would be made until after the November election. Preston Hazzard, FISD director of fine arts, said the district would want to use the facility 150-167 days out of the year, many of which could be for hosting regional competitions during the day.

Hazzard said the district would also want the option of using the facility for weekend and evening performances as well as the ability to reserve a stage for building sets, some of which may not be easy to dismantle and would need to be left intact for the duration of the performance.

“As a district, we’re continuing to look at partnerships and what that might look like through the lens of our student opportunities model and what a facility like this would bring to our district and our students’ experience in Frisco,” he said.

On the private sector side, developer Craig Hall has said he is willing to donate land within Hall Park for a center. Hall said two potential sites within the office park have been identified, but he would also like to see whether a feasibility study deems the office park as a viable location for a center.

The Eisemann Center for Performing Arts and Corporate Presentations in Richardson is another example of a city-owned and -operated center. The center’s staff reports to the city manager’s office, and the facility operations are funded by hotel/motel tax funds, Managing Director Bruce MacPherson said.

“We’re a regional center,” he said. “It’s heavily used by the Richardson-based arts organizations as well as businesses. … The reach as far as use of the building goes all over the Metroplex. There’s groups as far as Fort Worth who will come in. We’ve had groups from Temple and north of McKinney.”

Though the Eisemann Center is run by the city of Richardson, it got off the ground with help from donations and sponsors, MacPherson said. For example, the center is named for Charles W. Eisemann, whose family made a large donation to the center.

When asked whether Frisco would consider owning and operating its own facility, Cheney said the city does not know how to run a performing arts center.

“We’ve done very well with the public-private partnership, allowing professionals to do their job,” he said.

Committee co-Chairman Sean Heatley said the committee discussed whether the district should operate such a facility.

“FISD doesn’t do that for a living; they teach kids and create curriculum and such,” he said. “There’s a third party out there somewhere that’s going to be much more effective at all of this, and I think that that’s the best person to put in the middle of this partnership­—a third party group that runs these facilities for a living.”

“One of the arguments we made towards the performing arts center having a space in that bond initiative was I likened it to the Grand Park proposition,” she said. “... Is there a specific plan on exactly how Grand Park is going to look? No. Why are we including it? It’s because it improves the quality of life for all the citizens. So if we could include Grand Park, I don’t see why we couldn’t include a performing arts center.”

Meinershagen said the perspective on arts in Frisco has shifted with more people voicing strong support.

“We are definitely in a new era on the perception of the arts,” she said. “I think it’s very positive.”

Heatley said if FISD’s bond passes, it could be the catalyst that kick-starts a performing arts center.

“The city and the arts community and Craig [Hall] seem to be in a stall, a holding pattern,” he said. “Now that [FISD] has entered, maybe that nudges it off of that holding pattern. It doesn’t get it done, but it at least allows the conversation to go to the next step.”