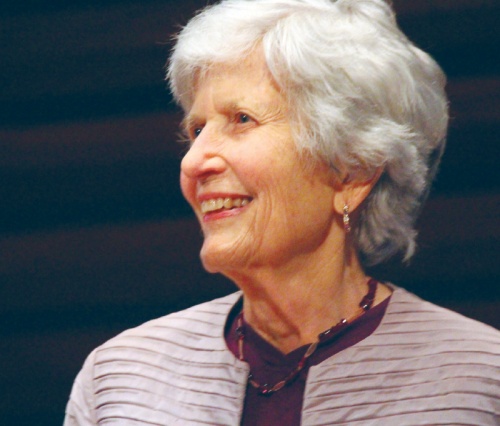 Vivian McCallum stands in Frisco City Hall in 2016 as sheu2019s honored for her contributions to the city.

From the various historical markers established in the city to the very existence of the Frisco Public Library, Vivian McCallum’s influence is seen throughout Frisco.

Vivian, a longtime Frisco resident, community leader and lover of books, gardening and antiques, died in February. But those who knew her said her legacy will continue to live on in Frisco.

“She left her thumbprints and fingerprints all over the city,” former Frisco Mayor Maher Maso said.

Vivian was born May 29, 1925, and grew up in Frisco. She married her husband, Bill, in 1943 and traveled for several years as a military bride during World War II. After leaving the military and a long career with Otis Elevator Co., Bill retired in 1983, and the McCallums moved back to Frisco.

The couple opened a shop in downtown Frisco where Bill housed vintage cars in the back and Vivian had antiques at the front. Upon seeing the need for public library, Vivian offered her shop as a space.

Vivian and other volunteers began collecting and cataloging books and holding story time at Frisco’s first library. She also founded the Frisco Book Review Club in 1984.

Even toward the end of her life, Vivian remained active with the book club and Friends of the Library, her daughter Linda Ness said.

“She was quite dedicated to the different clubs and organizations and the artwork and the gardening, whatever it was she was doing,” Ness said.

The library moved to a location on McKinney Street in 1992 before eventually landing at its current, four-story location at Frisco City Hall in 2006.

The library is now planned to move to a larger space by 2022 south of City Hall. Library Director Shelley Holley said Vivian’s legacy will live on in the new library.

“Of course she was interested in the history because she was the history,” she said. “Being born here … and to see the growth and the progression of the city was something that she really enjoyed greatly.”

Vivian and Bill worked to restore the T.J. Campbell house, one of Frisco’s oldest homes and the current location of Randy’s Steakhouse on Main Street. Vivian was one of the early members of the Heritage Association of Frisco and chaired the association’s Historic Marker Project for several years.

Maso said Vivian often contacted him when he was mayor to speak when a new historic marker was established.

“She was very persistent about making sure Frisco’s history and heritage [were preserved],” he said.

Maso and the City Council honored Vivian in 2016 for her contributions. A room in city hall and a park are also named after her, and she was named the 1994 Silver Citizen of the Year by the Frisco Chamber of Commerce.