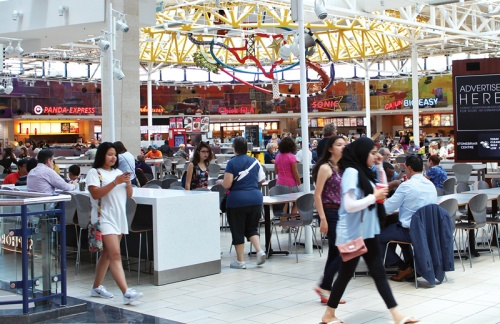 Stonebriar Centre is one of the most visited locations in Frisco. An attack on the mall was prevented in May.

In recent months several threats have been made in Frisco toward schools and Stonebriar Centre, the oldest major development in Frisco. As about 10 new large developments make their way to Frisco, public safety officials say they are continually monitoring the city’s security needs.

In early May, Matin Azizi-Yarand was arrested and charged with making a terroristic threat and criminal solicitation of capital murder against a peace officer. According to investigators, Yarand was planning an ISIS-inspired mass shooting at Stonebriar Centre.

“We have not investigated a threat to that scale; that was really the largest event for us, but we deal with threats all the time,” Bruce said.

Frisco resident Jamie Heit, who manages a community Facebook page called Frisco Residents Who Care, said residents have raised concerns on social media related to threats and other crimes that have happened recently at schools and Stonebriar Centre.

“There’s a concern that as these developments grow and more people come there’s certainly more of a risk
or increase in numbers of incidents,” she said.

Bruce said despite recent threats he does not think Frisco is becoming more of a target.

“We have to keep watching for indicators of the [city’s] growth rate, where [developments] are coming in and what kind of impact that will have,” Bruce said. “Additionally we watch what’s happening around the world and study events that have happened to try to identify if it could happen in Frisco, and how would we respond to that and make adjustments if necessary.”

With the addition of The Star in Frisco, Frisco Station and other projects in the past five years, officials expect these new developments to attract more visitors to the city.

“As these [developments] come on board we re-examine if additional resources in those [areas] need to be enhanced,” Bruce said.

In the past five years the budget for the police and fire departments has increased steadily. This fiscal year the city of Frisco budgeted nearly $77 million for police and fire, adding more officers and firefighters.

“Our decisions are data driven,” Frisco Fire Chief Mark Piland said. “We collect data every month by
seeing where calls are coming from [and] our response times, and this tells us exactly where the pressure points are located.”

In the case of a threat made to a building or school, both police and fire departments use a software known as Situational Awareness for Emergency Responses, or SAFER. The software allows public safety officials to access blueprints for any building in the city.

“You have to trust that your local police—and I can only speak to Frisco—is well trained, and we practice our scenarios, and we believe we have either the capabilities or the contacts to get the capabilities that we need to face any situation,” Bruce said.

Frisco police and fire departments undergo trainings to keep officers and firefighters informed and equipped to deal with different types of calls and developments.

While a new building or development is under construction the fire department will visit the site to familiarize themselves with the structures, so in case there is an incident firefighters will know what they are up against, Piland said.

Bruce said Frisco police officers train about 60-70 hours on average per year, more than the state’s requirement of 40 hours of training every two years.

“We train a lot on what we would consider high risk or high liability, which includes [speeding], shootings, uses of force and more,” Bruce said. “We don’t get to use all of those skill sets all the time, so we need to be prepared to use them [if and when] a call comes in.”

Currently there is a Public Safety Training Center under construction on the southwest corner of Rockhill Parkway and Preston Road. The facility, which costs about $6.5 million, will be used by both police and fire for training purposes.

The facility will include a police driving pad, classrooms and a burn tower for live fire training. It will have the ability to expand if needed. Fire Station No. 9 will be next to the facility. Both the training facility and fire station are expected to be complete by June 2019.

“As the city continues to grow, I don’t see our training going anywhere but up,” Piland said. “As we’re faced with more challenges more training comes into play.”

Stonebriar Centre has been in the city for 20 years and is one of the most visited places in Frisco averaging about one million visitors a month, Stonebriar Centre General Manager Randy Barnett said.

“With the continued growth of Frisco and this region, we would anticipate that those [visitation] numbers would remain strong and grow as well with us adding KidZania in 2019 and the Hyatt Regency hotel in 2020,” Barnett said.

KidZania is a 80,000-square-foot children’s entertainment center, and the Hyatt Regency hotel is an 18-story building attached to the mall, both of which are under construction.

Bruce said the mall has a larger footprint than any other development in Frisco.

The mall has its own security team but partners with FPD for annual safety training throughout the year for incidents such as shoplifting or an active shooter, Barnett said.

Barnett said he could not elaborate on the mall’s security measures for safety reasons but said following the threat made toward Stonebriar Centre, security was evaluated as it is on a consistent basis.

“We’re constantly evaluating our day-to-day operations and security, and we look at the growing population [to see] if there’s change in the market or increased traffic,” Barnett said. “That data gives us information for making decisions, such as adding more security officers.”
SHARE THIS STORY