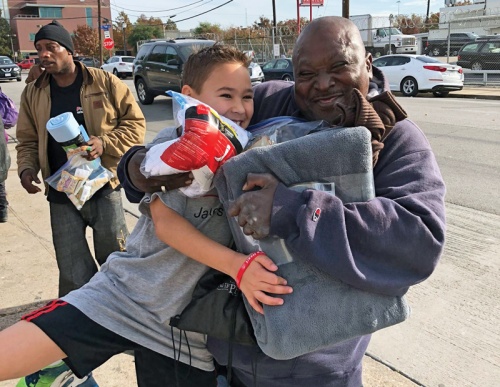 Jakeu2019s Heart is a nonprofit organization aimed at supporting the needs of the homeless.

Jake Garrett-McCann is a typical 8-year-old boy, with one exception: He goes to school in Frisco ISD, does homework, gets grounded, reads books and has founded his own nonprofit organization.

Jake’s Heart became an official nonprofit organization in fall 2017. The organization helps supply the needs of those who are homeless through advocacy and donations.

Jake first noticed homelessness at age 3 when he was on a trip with his parents in Austin. He said he noticed a man asking for money, and Jake asked his parents about it.

“We felt amazed that he could empathize and even express his concern over the people that he was seeing and didn’t know,” Jake’s mother, Kimber Garrett, said.

Jake kept asking his parents about it and eventually started talking about ways he could help those who are homeless. He began collecting donations to pass out to those in need in downtown Dallas.

Jake’s efforts eventually grew to the point that he and his parents filed to have his organization become an official nonprofit.

Through Jake’s Heart, a team of volunteers assembles a few times a year to gather donations and distribute them in downtown Dallas. Soon, volunteers will also hand out donations in northern suburbs where the homeless population is growing.

People can support Jake’s Heart through monetary donations, donating clothes and goods, or signing up to hand out donations. The organization is also seeking business sponsors, Kimber said.

Jake said his long-term goal is to build a center for families to live and receive vocational education.

“We want to make sure that when we help the individuals out on the street that we can provide them a way or a path to transition from the streets to a productive life and have employment on the other side,” Kimber said.

Jake said he enjoys handing out clothes and essentials to those without a home.

“I do this because it makes me happy because I’m helping people that need it,” he said.