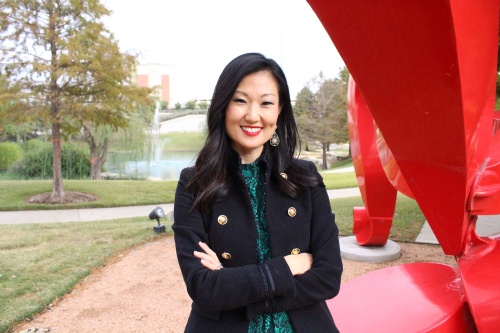 Tammy Meinershagen is the executive director of Frisco Arts.

Through her efforts, she has increased membership of the Frisco Arts nonprofit arts advocacy organization, pushed for an increase in arts public funding and organized the city’s first-ever Frisco Arts Walk.

“I see myself a bit as a champion of the arts and also a protector,” Meinershagen said. “I want to give arts in Frisco a chance to grow and thrive.”

Born in Rockford, Illinois, to South Korean immigrant parents, Meinershagen said she was introduced to music as a child after attending a Chicago Symphony Orchestra performance. After the concert, Meinershagen decided she wanted to learn to play the violin. At age 5, performed her first concert with the Rockford Symphony Orchestra.

Meinershagen continued to study violin and piano, and after a short-lived decision to study journalism at Northwestern University, she switched to studying music and English.

She and her husband, Todd, lived in Chicago until 2004 when they decided to move to Frisco. She began giving private music lessons and performed with the Texas String Quartet.

She became involved with Frisco through the 2015 Citizen’s Bond Committee and saw that as her opportunity to advocate for arts.

“I think when you’re an arts advocate and passionate about the arts, you will speak up no matter what; you feel like you need to protect the value of what’s kind of being overlooked,” Meinershagen said. “My goal was to help get the arts back to where it belongs, which is a place of immense joy.”

She then joined the advisory board for Frisco Arts, which was put in place in 1996 by business leaders to handle the arts grants program. Meinershagen was later hired as executive director.

Meinershagen is currently working with city officials as well as developer Craig Hall in an effort to bring a performing arts center to Frisco.

When she is not advocating for the arts or raising her family, Meinershagen said she loves to play on her Steinway piano, the same piano she has had since she was age 8. She said it still has the marks where she used to bite the piano lid when she would get frustrated practicing.

Meinershagen continues her music career, and has a YouTube channel called Frisco Violin Girl, where she plays heavy metal, rock, pop, jazz and country music with an electric violin.