Voter turnout in Frisco plunges from November to May elections

See how voter turnout for local elections in Frisco have changed over the years. (Community Impact staff)

More than 78% of Frisco’s registered voters cast ballots in the November general election, which combined state and national races with city council and school board seats, resulting in the highest participation numbers the city had seen in recent local elections.

Just months later with only local races on the ballot in May, Frisco’s turnout reached only 8.9%.

While local elections allow residents to decide who will represent them on issues such as fixing local roads, repairing sidewalks, setting trash pickup rates and reviewing developments, it is not easy to get people to vote in these races, said Janice Schieffer, vice president of voter service for the League of Women Voters of Collin County.

Local elections in 2020 were pushed from May to November to better give people an opportunity to plan for an election in the midst of a pandemic. This meant positions on the Frisco ISD board of trustees and Frisco City Council were on the same ballot as races for the U.S. president, U.S. Senate and state representatives.

But without the national races drawing interest in the May 1 election, turnout in the local races dropped significantly. For instance, in the November election 71,064 registered voters in Frisco weighed in on the three-way race for the Frisco City Council Place 6 seat. However, the May election for the four-way race for the council’s Place 3 seat was decided by 10,272 voters. And the number of participants in the June 5 runoff for that Place 3 seat is expected to be even fewer.

Low participation rates can significantly affect the nature of representation at the ground level of local government, Schieffer said.

“Low turnout means that just a small group of voters will get to decide the elections, and a lot of times, this means that a single issue becomes the contested point in an election rather than the overall governing philosophy,” Schieffer said.

Frisco Mayor Jeff Cheney ran unopposed in November for re-election. He said that when he faced a challenger in his run for mayor in 2017, a big part of his campaign was just telling people to go vote.

“Definitely a big part [of campaigning] is educating—first and foremost that an election is happening and what they’re voting for—but then, more importantly, is educating them on the candidate and their position,” he said.

Permanently moving city and school elections to November along with statewide and national races is something for which some have advocated, said Matthew Eshbaugh-Soha, chair of the Department of Political Science at the University of North Texas.

“You’re more likely to captivate people because they already have a sense that they should be paying attention to elections in government, but when you spread it out [from November to May], you really depress turnout,” Eshbaugh-Soha said.

Moving local elections to November could also make them more partisan, and that’s something to be avoided, said Christopher Lee, the director of government affairs for the Frisco Chamber of Commerce.

“It’s hard to be partisan when you’re trying to figure out where that sidewalk goes. That’s not a partisan issue,” Lee said. “It should be what’s best for the citizens of Frisco, period.”

He said the chamber had its eye on two bills that were proposed in this year’s legislative session that address local elections. One would require candidates to declare their party affiliation in municipal elections, and the other proposed moving municipal elections to November. However, as of press time, neither made the deadline to enter either chamber’s floor for a vote.

“Partisan issues should be optional and not required of anybody—we don’t need to further that trend,” said Tony Felker, who is the Frisco Chamber of Commerce President and CEO as well as a former Frisco City Council member. “[Separate elections] gives the best opportunity for local people to be educated and engage with local issues and local candidates, and we feel that’s the best way to keep that going, moving forward.” 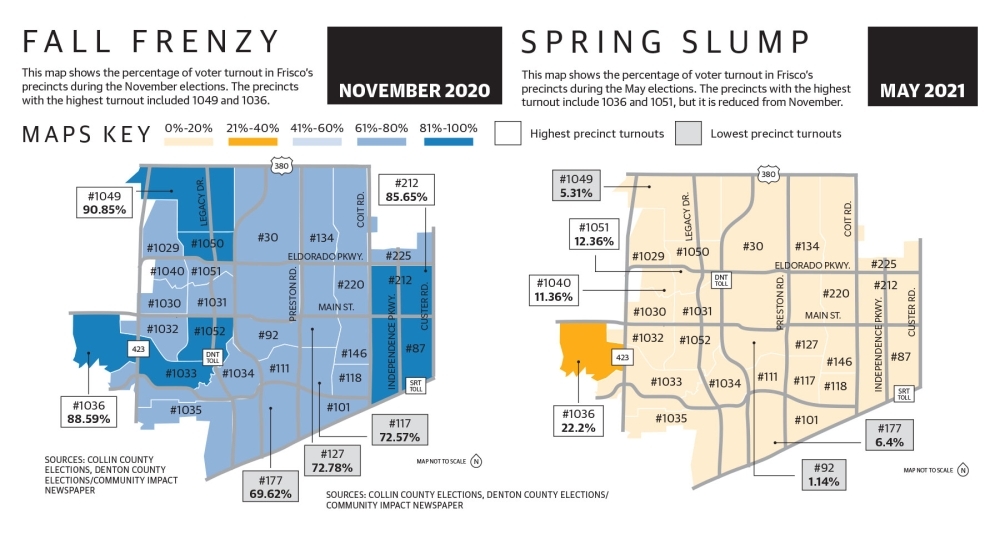 Another issue with moving local elections to November is losing focus on local priorities, Eshbaugh-Soha said. Longer ballots mean people have to dedicate more time to learning who the candidates are and where they stand on issues. It is possible that national politics would drown out the local issues, and people would still choose not to vote on important measures on the ballot, he said.

“If everybody’s fixated on the president and there are important local issues, maybe we’re not really having a conversation about that,” he said. “That could do a disservice to local politics.”

Instead, people may be more inclined to vote when there are more candidates on the ballot or if some of the items are controversial, Schieffer said. This was the case in May for the city of McKinney, where there were multiple candidates running for mayor and City Council positions as well as four school propositions on the ballot, she said. As a result, the city reached about 19% for voter turnout—something officials consider to be good turnout for a local election—but this paled in comparison to participation in the November election.

“Competition often brings out more voters because you’ve got more people trying to, I guess, motivate the voters to go to the elections,” Schieffer said. “If you have competition, it feels like there’s something really at stake.”

Both Schieffer and Eshbaugh-Soha said more people would likely vote in local elections if they had more information available.

“When we’re talking about presidential elections, it’s impossible not to know some significant amount of information about candidates for that office, but it’s difficult to know your City Council election and who’s running,” Eshbaugh-Soha said. “The individuals who are likely to vote are those who are knowledgeable about the City Council, they’re knowledgeable about election day, and they will seek out that information, even if it’s not provided to them in a more passive way as it may be through news media.”

One way local organizations seek to bridge that information gap is by providing candidate forums. This is something both the League of Women Voters of Collin County and the Frisco Chamber of Commerce participate in ahead of elections. They provide opportunities for residents to learn more about the candidates and the issues, they said.

It can be a tough balancing act between getting people motivated to not only learn about the issues but also to vote, Felker said.

Lee pointed out that those who are unwilling to vote are letting others make decisions for them.

“That’s one of the biggest consequences of low turnout, is an abdication of duty,” Lee said.