BREAKDOWN: See how Dallas-Fort Worth Metro voted in the 2020 U.S. Senate and presidential primary elections

Approximately 320,219 votes, or about 93.73% of all participating Republican voters, were cast in support of Trump as the party nominee across the four DFW Metro counties, and another 203,642 ballots, or 38.1% of Democrat voters, chose Biden to represent the Democrats in the November presidential election.

Trump also dominated the largely uncontested Republican Party primary throughout Texas, recording 94.05% of all primary votes, while Biden is projected to receive the most Democrat primary votes, about 32.41%, according to Texas Secretary of State unofficial results. U.S. Sen. Sanders, I-Vermont, received 29.72% of all statewide votes and former New York City Mayor Michael Bloomberg earned 15.49%. U.S. Sen. Elizabeth Warren, D-Massachusetts, placed fourth in the Democrat primary with 11.64% of the 1,653,588 votes counted as of 7 a.m. Central time March 4. 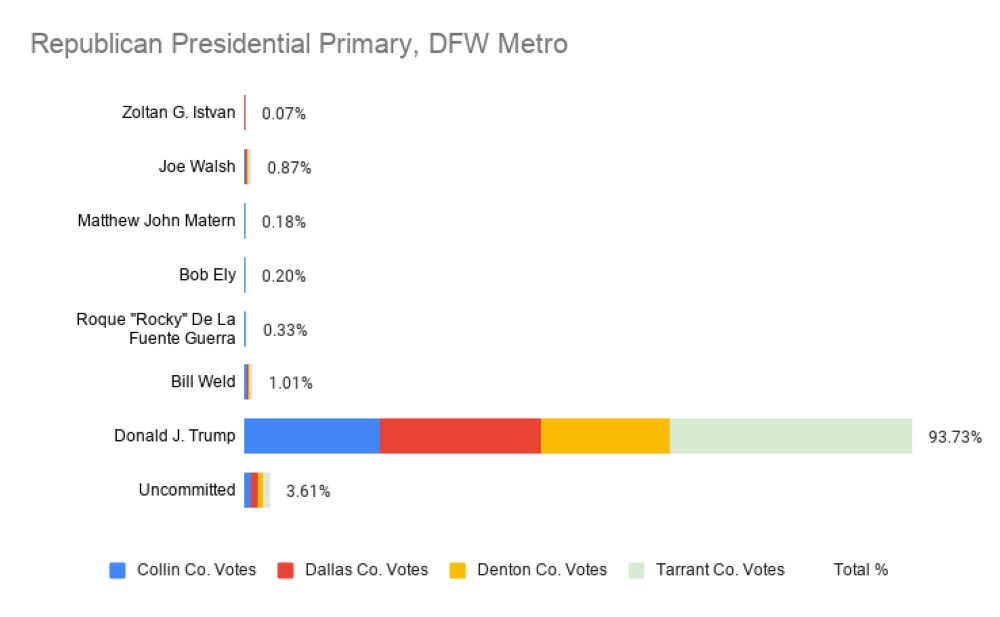 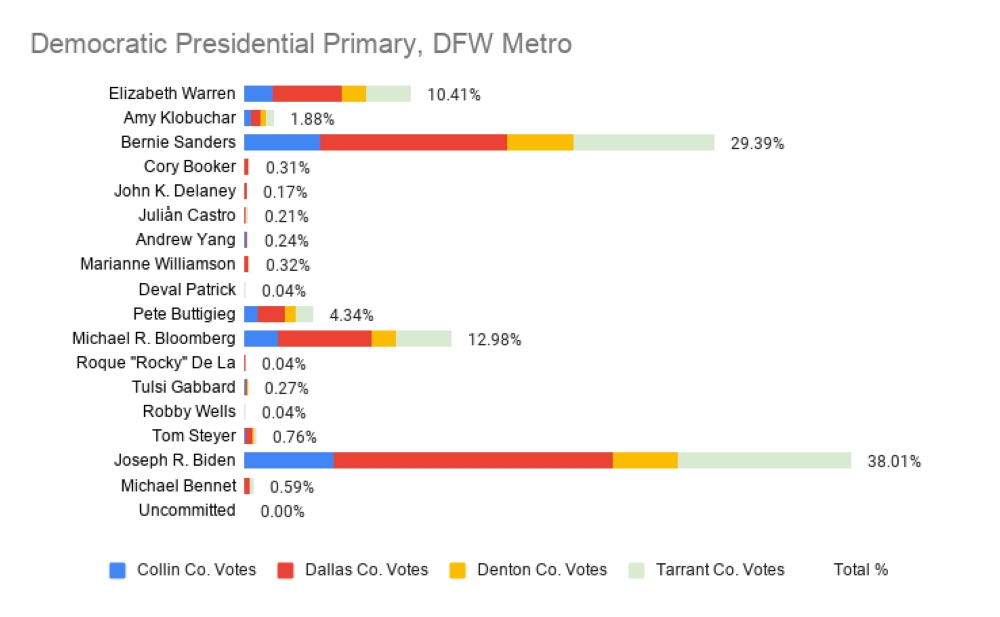 Democratic candidate Mary "MJ" Hegar and incumbent U.S. Sen. John Cornyn, R-Texas, were the big winners of the March 3 U.S. Senate primary election. However, it was Texas State Sen. Royce West, D-Dallas, who captured the most DFW Metro votes on all Democratic ballots cast across the four-county area. Hegar garnered significantly less local support, approximately one in every five Democratic voters across Dallas, Tarrant, Collin and Denton counties, and Cornyn received 257,848 votes, or 78% of all Republican votes throughout the DFW Metro.

Hegar bested the other Democratic candidates statewide with 22.28% of the nearly 1.85 million Democrat votes cast in Texas. She'll advance to a May 26 runoff against Texas state Sen. Royce West, D-Dallas, who has 14.52% of votes counted. Third-place candidate Cristina Tzintzun Ramirez received 12.76% of all votes, failing to make the runoff election, which occurs between the top-two candidates if no one receives more than 50% of the vote.

Cornyn received 76.31% of the 1.95 million Republican state primary votes. He will appear as the Republican nominee on the Nov. 3 general election ballot. 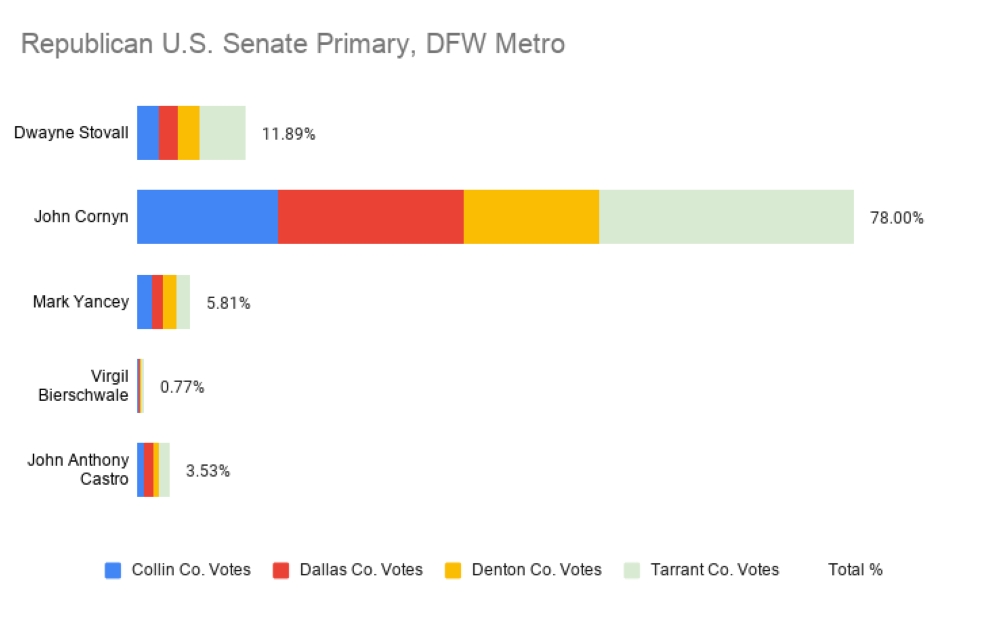 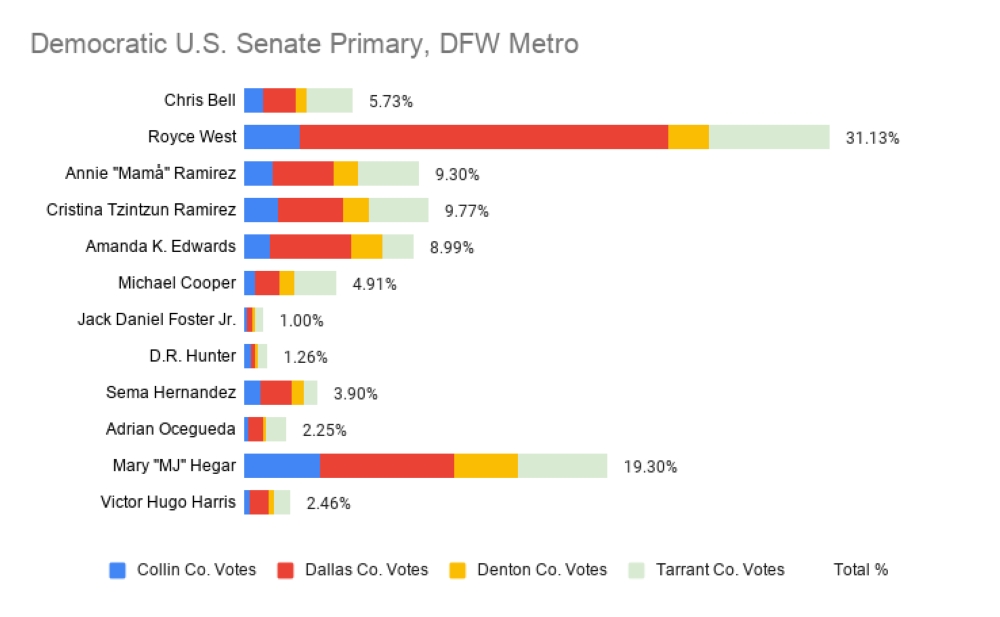 Editor's note: This story has been updated to correct the total number of votes cast in Collin, Dallas, Denton and Tarrant counties.

Texas 2020 Primary us president us senate
SHARE THIS STORY