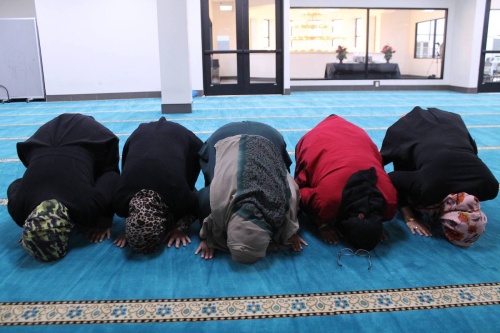 Women pray at the Islamic Center of Frisco in December 2016.

Frisco ISD fell under the national spotlight last week when the Texas Office of the Attorney General sent the district a letter raising concerns about its prayer room at Liberty High School.

The prayer room was designated in 2009 to accommodate Muslim students who were needing to leave campus for two or three hours every Friday to pray, according to Wingspan, Liberty High School’s student-led news outlet.

The AG’s letter to FISD states that the prayer room seems to be dedicated only to Muslim students.

“It is unclear if students of other faiths may use the room at the same time or at other times during the week,” the AG’s letter states.

The district responded to the AG’s letter that same day, asking for any evidence or documentation of students being denied access to this prayer room.

“[The prayer room] is open to Baptists, Methodists, Catholics, Hindus, Buddhists; anyone that wants to go in there can do so, and they do utilize the room,” said Chris Moore, FISD's executive director of communications and community relations.

The AG's office website does not show a reply to FISD’s response.

Here are some facts regarding prayer in school:

Here are some facts about FISD’s prayer room, according to Moore: