Collin College has called a $600 million bond election for May 6 to complete projects in its long-range master plan. College officials said they expect the financial impact to the tax rate to be minimal.

Collin College’s current tax rate is 8.122 cents per $100 of property valuation. It is the lowest tax rate in Collin County and the second-lowest tax rate out of 50 community college districts in Texas, according to the Texas Comptroller’s office.

“Our tax rate is exceptionally low, and over the years we have been frugal, and we have tried to be wise in how we spend taxpayer money while providing a high quality education,” board of trustees Chairman Bob Collins said.

Lynn said the college has put together a financing plan that includes a rate stabilization feature. This means that the college will reduce the Maintenance & Operations tax rate to give room for an increase to the Interest & Sinking tax rate, which provides funds for payments on the debt that finances a district’s facilities.

“The goal is to keep [the rates] balanced so that over time there is little to no effect on the overall tax rate,” Lynn said.

If voters approve the bond, the proceeds would go toward construction of six facilities: a campus in Wylie; educational centers in Celina and Farmersville; a public safety training center in McKinney; a workforce/university IT center of excellence on the Preston Ridge campus in Frisco; and a technical training center in Allen. It would also help fund improvements and renovations to existing buildings.

Collins said the college is free of debt and has kept pace with growth for the past 32 years, and the bond is necessary to keep up with the rapid growth in recent years.

“The county is projected to double in population by 2030 and triple by 2040. I can tell you that our current footprint will not be able to handle that growth,” Collin College President Neil Matkin said. Collin College hired PBK Architects to conduct a facilities master-plan study last spring. The study showed the college had to expand its footprint, an undertaking that is expected to cost about $600 million, Lynn said.

“As of right now, the costs are estimates, and once the college hires a program manager to
oversee the projects, we’ll be able to refine those estimates,” Lynn said.

Collins said if the cost of building the facilities comes in at less than $600 million, then the college would not sell the rest of the bonds.

Trustee Mac Hendricks voted against the bond proposal. He said he would have liked a bond proposal less than $600 million.

The last Collin College bond election was in 2001. Since then, the college has built facilities in Plano, Frisco and McKinney.

For more information on the college’s master plan and bond proposal, visit www.collin.edu/masterplan. 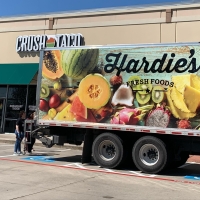 The taco shop shifted to only offering to-go orders in mid-March.

The company is planning to give its workers the opportunity to wear masks and gloves while on the job.

‘Be prepared to be flexible’: Frisco OB-GYN urges expectant mothers to check in with hospitals amid COVID-19

Library Director Shelley Holley said the city facility is offering regular story times and other programs through its social media pages and has already boosted its e-book and e-audiobook offerings.