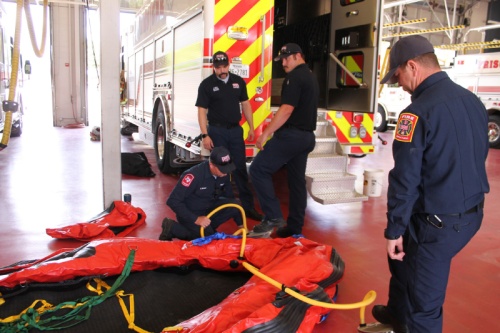 The first phase of Frisco’s new Public Safety Training Center will open in September, and public safety leaders are already eyeing the possibilities with the second phase still to come.

Assistant Police Chief Darren Stevens called the center a “game-changer” as it relates to training and recruitment.

The second phase is among the projects being funded as part of a $62.5 million bond approved by voters in May. Other projects include renovating the police headquarters, building the city’s 11th fire station and upgrading equipment.

The city’s landscape is quickly changing with more than 2,000 acres set to be developed in far north Frisco in the coming years, Frisco Fire Chief Mark Piland said.

The projects coming as part of the bond will help address growing pains before the departments are “busting at the seams” as they have before, police department spokesperson Grant Cottingham said.

“I’m appreciative of the fact that we’re able to get ahead of the curve so that way we can accommodate the growth that we need in order to keep up with the growth of our city,” he said.

Being in one of the fastest-growing cities in the country, Frisco’s fire and police departments have to address the increasing needs of the population.

The city’s crime rate has remained relatively consistent over the years, Stevens said, though the volume of crimes has increased. “As the city has grown, so have our demands,” he said.

The Public Safety Training Center, located next to Fire Station No. 9 southwest of Preston Road and Rockhill Parkway, is Frisco’s newest tool.

It includes a four-story burn tower, a vehicle-extrication pad, indoor and outdoor classroom space, and a driving pad, which helps officers and firefighters improve driving skills.

Without an in-town facility, police and fire employees have had to travel to other cities to receive needed training. Those employees can train in the city once the new center is complete, Piland said.

“In the event that we have a multialarm fire or something of that nature, we can pull those firefighters back out of that training and get them back on the apparatus and get them in service,” he said. “When you’re 40 minutes from [Frisco], it’s very difficult to do.”

Plans for the second phase of Frisco’s training center, estimated to cost $15 million, are not finalized, but police and fire officials will meet soon to discuss ideas, Assistant Fire Chief Lee Glover said.

Ideas include an administration building and additional classrooms, Stevens said.

The police department will also have the opportunity to host more regional trainings at the center. That also helps introduce potential top talent to the city, said Shanna Keaveny, the chairperson for the Frisco Citizen Bond Committee, which helped to vet the projects.

“We’re bringing state-of-the-art training to our city and to our staff so we can recruit the best and the brightest to Frisco,” Keaveny said.

The exact location for Frisco Fire Station No. 11 has not been determined. Piland said multiple factors help determine where to build a fire station, such as future development and the concentration of emergency calls.

Frisco Fire Station No. 2 will be renovated with 2019 bond funds. Upgrades include adding a new bay, replacing the large sleeping dorm with individual bedrooms and creating an enclosed workout room.

“Right now these guys are working out in the bay, and when it’s this time of year, they really can’t work out … in that hot bay,” Glover said.

The renovations, estimated at about $4 million, will support the station for the next 25 years, he said.

The fire department also plans to replace four fire engines in the next six years and add two more to the fleet, Glover said. One fire engine with the necessary equipment costs about $1 million, Glover said.

Ten new outdoor warning sirens are included among the bond projects to accommodate new development and replace some older sirens, said Kyle Mills, deputy chief for support services. The sirens are designed to alert people who are outside to severe weather—such as tornadoes, hail or damaging wind.

The police department will renovate 60,000 square feet of its headquarters and add an 11,300-square-foot auxiliary building. The changes will give more space to departments that are adding staff, Stevens said.

Some space within the headquarters, such as lobby areas and the fitness center, will be converted to offices, Stevens said. Other uses will move into the auxiliary building.

The department will begin meeting with architects later this year to finalize plans, he said.

The department is fortunate to be in a city where residents recognize the importance of public safety, Stevens said.

“We are very appreciative of the fact that the citizens returned a positive vote on this [bond] because it’s going to allow us to grow and expand and remodel here in the short run, which is going to help us get ready for what will be future growth and expansion as the city heads toward build-out,” he said.