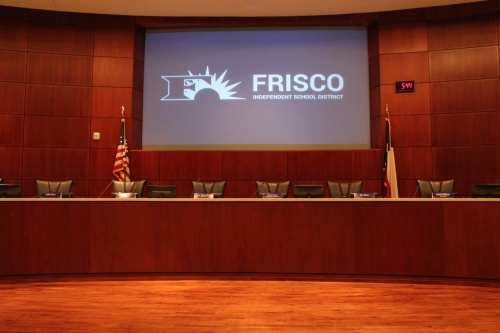 
Frisco ISD’s board of trustees elections proceeded as scheduled May 4 despite a lawsuit claiming the district’s at-large voting system prevents minority candidates from getting elected to the board.

The suit, filed April 16, claims the FISD board does not reflect the district’s current demographics. Since the 2016-17 school year, less than 50% of the student population has been white, and the largest minority group is Asian, according to Texas Education Agency data.

The six board members who served prior to the May 4 election and were named on the lawsuit are all white. The suit alleges that seven candidates—five Asian and two Hispanic candidates—have unsuccessfully run for a seat on the board in the past four years.

“By looking at the voting patterns, it’s clear that polarization—that’s the nice word for it—exists … meaning whites will tend to vote for white candidates and candidates of color tend to see the vast majority of support from people of the same ethnic or racial background,” said William Brewer, the attorney for the plaintiff, Suresh Kumar, who lives in FISD.

FISD issued a statement saying it has received notice of the lawsuit but would not comment on pending litigation.


The suit calls on FISD to move away from the at-large system, in which every board member represents the entire district rather than specified areas of the district, and into single member districts. Brewer said he hopes this change would provide opportunity for more diversity on the board.

Residents familiar with the lawsuit are split as to whether the suit is beneficial to FISD.

FISD resident Jeffrey Gray and his family have lived in FISD since 2013. Gray, who has also served on the district’s Priorities-Based Budget Stakeholder Committee, said he supports the lawsuit because he would like to see a diversity of ideas when the board votes on the district’s finances and other major decisions.

“Single-member districts would be more likely to generate people who might actually bring a perspective from their constituents,” he said.

Ram Majji is the co-chairman for the Frisco Indian Affairs Committee, a group dedicated to supporting the Indian community in Frisco. Majji said the committee does not think a lawsuit is necessary to get minority representation on the board. He said he wished a discussion would have occurred before a lawsuit was filed.

Majji said city and school district officials show that they represent the interests of the Indian and Asian community by showing up at various Indian Affairs Committee events.

Majji said he knows minority candidates have run for board seats and have not been elected. But he said he has been encouraged to see the broad support from people of different races for Gopal Ponangi, a minority candidate for the Place 1 seat this year who won the election.

“To me, that is a happy moment,” Majji said. “Living in Frisco, if I’m seeing someone being supported in every race, every color, that’s a big plus.”

The lawsuit claims the at-large system violates Section 2 of the Voting Rights Act of 1965, which prohibits policies and procedures that discriminate based on race or color. This argument has been used in additional lawsuits Brewer’s law firm has filed against other local school districts. It also has been used successfully against other boards and councils across the country, said Barry Burden, the director of the Elections Research Center at the University of Wisconsin-Madison.

Burden said the argument that at-large systems discriminate against minority candidates has been around since at least the 1970s.

Some cases against at-large entities have resulted in boards and councils having to create geographic districts, Burden said.

“There is precedence for this kind of argument that minority groups are at a disadvantage, particularly if they are geographically concentrated, if they live in particular communities rather than being evenly spread out across the community,” he said.

“I don’t know if we have great evidence about either one of those arguments, but those are the common explanations you hear for holding onto at-large elections,” Burden said

Barry said there is an argument that single-member districts could generate higher voter turnout because voters would have more interest in a race that affects their neighborhood. However, he said he does not know of any studies that support that theory.

For entities that move from at-large systems to single-member districts, the transition can be bumpy, Burden said.

“On the one hand, the people drawing the districts need to make sure they give the adequate representation to minority groups,” he said. “… On the other hand, you can’t go too far as a mapmaker in doing that. You then are accused of packing the minority group excessively in a district and undermining their chance of having more representation.”

Brewer Storefront, the law firm that filed the suit against FISD, has sued other school districts and councils in the area over similar issues.

Earlier this year, Richardson ISD settled its claim, agreeing that five of its seven school board members will be elected to represent single districts. RISD postponed its May school elections to November.

A separate suit is pending against Lewisville ISD, which serves a portion of the city of Frisco. The lawsuit against LISD was filed in February. The district has denied claims that its at-large voting system for school board trustees puts Hispanics and other minorities at a disadvantage, according to a federal court filing on March 22.

The firm has also resolved similar claims after suing Carrollton-Farmers Branch ISD in 2015 and Grand Prairie ISD in 2014. Those districts now have revised voting systems. Separate lawsuits involving Irving ISD and the cities of Irving and Farmers Branch went to trial, where the firm’s claims prevailed.

Brewer said his law firm has looked at multiple at-large systems in the area, including Frisco City Council, and will consider taking on other lawsuits in the future.

The other, Ponangi, won against Nathan Adams for the open Place 1 seat. FISD believes Ponangi is the first minority candidate elected to the board, district spokeswoman Meghan Cone said.

Natalie Hebert, who won the Place 2 seat, and Ponangi both live in the eastern part of the district, according to their election applications.

Brewer said the lawsuit’s case is still valid, even with a minority candidate elected to the board, because FISD’s at-large system has historically prevented minorities a chance to serve.

“There needs to be a system in place that enables [minorities] to get their voices on the board,” Brewer said.