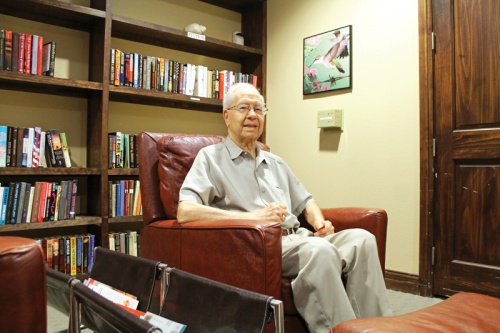 His name is seen throughout Frisco: on a community park, on a street sign, on a clock in the center of the city and, at one point, on a burger at a local restaurant.

But when asked how he feels seeing his name on display, Bob Warren replied, “I don’t know that I deserve it.”

At age 97, Warren talked about his time as a Frisco City Council member, the city’s mayor, one of the founders of the Frisco Heritage Association and a member of numerous boards and commissions without assuming credit for Frisco’s success.

“Frisco’s success has been partnering with different entities; that’s been key,” he said.

Warren was born in 1921 at his family’s home in what is now old downtown Frisco. He graduated from Frisco High School in 1938 and attended Texas A&M University for four years.

Before graduating from college, the U.S. naval base Pearl Harbor was attacked by Japanese military forces in December 1941. Warren said the attack prompted him to join the U.S. Army Air Corps, which later became the U.S. Air Force. Warren served in the Air Force until the early 1960s when he retired as a lieutenant colonel.

Warren spent the rest of his career working for Humble Oil and Refining Company—which later became Exxon—before retiring in the early 1980s.

Warren and his first wife moved into the house Warren grew up in to enjoy retirement. But a quiet retirement was not in store for Warren. It was not long before some of his friends tried to convince him to run for mayor.

But when one of his friends decided to step down from the City Council, Warren agreed to run for his seat and was elected as a council member in 1983. During Warren’s time on the council, the city hired its first and only City Manager George Purefoy, who Warren said is “the best thing that ever happened to the city of Frisco.”

In 1990, Warren finally decided to run for mayor and was elected for three consecutive two-year terms.

At that time, Warren said the city struggled to be recognized as a place that could be developed and grow. In 1991, voters approved a 0.5 percent sales tax to be used for economic development, creating the Frisco Economic Development Corp. Warren was one of the first FEDC board directors.

One of the FEDC’s first initiatives was to attract a mall to Frisco. Warren said the FEDC tried several measures to get developers to consider building in Frisco, including trying to hire someone to move dirt with a tractor to make it seem that development was happening in the city.

The city finally attracted a mall and signed the contract a few months before Warren was term-limited as mayor. Stonebriar Centre opened in 2001.

“[Stonebriar Centre] was the economic engine that propelled Frisco into the place that it is today,” Warren said.

Warren’s time on the City Council and as mayor also included compiling the city’s first comprehensive plan and establishing joint meetings between the council and the Frisco ISD board of trustees.

After serving on other city boards and commissions, Warren decided to at long last retire from civic service—at least his version of retirement. He still writes a column for Frisco STYLE Magazine, and two books have been published containing his articles.

Warren now lives at Parkview in Frisco retirement community with his wife, Beth. Although Warren said he is pleased with the way Frisco has grown, he said he would like to see some open space preserved, creating a glimpse of Frisco in the early 1920s.

“I still like to look out and see longhorn cattle every once in a while,” he said.